Inspiration in the New West 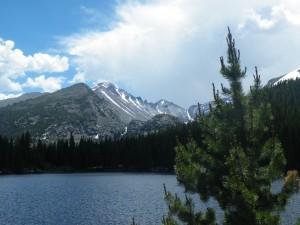 “Go West, young man,” wrote Horace Greeley in 1865. One hundred and forty-six years later, I took his advice, and I’m glad I did.

My family and I went to visit my cousin and her family (thanks, guys!) in Colorado over the Independence Day weekend. My wife, Kate, does a much better job of talking about our travels over on her blog, so for a more complete download, click over to her site.

As for me, well, I’ve seen mountains on a number of continents, but few measure up to the way the Rockies jut upward from the plains, an imposing wall of stone that probably prompted early American settlers to say, “Whoa, those are big. I don’t want to cross those. Let’s just put Denver here.” I never quite bought into the whole romantic notion of the Old West, but I have to say, the New West did a great job of putting my writer-brain to work.

Just being out there made me ponder my historical alchemy-punk, flintlock-fantasy setting. It’s currently set in 1779, with sailing ships exploring the solar system. But…maybe fast forward that to the 1860s. The American Civil War in the Jovian system? Ganymede vs. Callisto? Cowboys and aliens in the shadow of Jupiter? (Yes, I’m looking forward to the movie.) There’s a whole lot of something there that’s worth playing with.

We also visited the Shambhala Mountain Center, home to the Great Stupa, an amazing Buddhist temple. I was already playing with the notion of vimanas, the flying vehicles described in ancient Sanskrit lore, as conveyances for one of the alien groups in my book. Seeing the beauty and, to Western eyes, the exoticism of the Great Stupa firmed that notion up considerably. And yes, I know that the Vedas and Buddhism aren’t related at all. It was more a visual thing. Roll with me here.

Point is, while I tend to disregard the whole romanticization of Being A Writer (TM), I totally get why writers seem to thrive on travel. Output needs input, and travel provides a lot of new input. I found our visit to the West both relaxing and inspiring.

Of course, the New Belgium Brewery in Fort Collins might have also provided some liquid inspiration as well….their Abbey is excellent, and tasting La Follie was an incredibly unique experience. Now if we can just get them to distribute their beers on the East Coast.

One response to “Inspiration in the New West”