A tour of the Known Worlds: Mercury, Part II 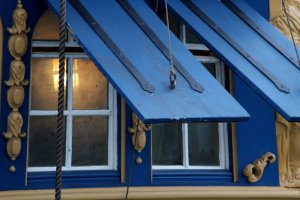 Once the stern of a brig, these windows now look into a hostelry on Elizabeth Mercuris.

Sorry about the lack of blogging here, folks. I was out in beautiful Los Angeles for my day job, and things were both busy and interesting (in good ways). I also had a chance to meet up with fellow NLA agency-mate Jason M. Hough for some quality Mexican food in San Juan Capistrano. No swallows were spotted, but the dinner was excellent and the authorial company even better. Jason’s a stand-up guy and a great writer, and if you’re not reading his blog or following him on Twitter, you should. His book, The Darwin Elevator, is out next year, and I for one can’t wait to read it.

Anyway, last I checked, I left you hanging around Mercury…and hanging is an apt term for what I cooked up in Spacebuckler. Now, I couldn’t make the Void around Mercury too hot, as I need to ensure the ships of His Britannic Majesty’s Royal Navy can come and go as they please. But it’s not like Mercury has water for a ship to splash down upon. While I could’ve simply given the planet some water, it didn’t seem right to me. So I decided it needed the 1779 alchemical equivalent of…

Imagine, if you will, several dozen merchantmen and decommissioned ships of the line, hovering in the Void above Mercury. They’re hammered together with wood and nail, bound with rope and sail cloth, and kept aloft by alchemical procedures. The ships themselves become shops and homes for those who mine Mercury’s ores. Wooden walkways bridge the gaps. Sails flutter overhead, catching the solar wind just enough to maintain a proper place in Mercury’s shadow.

All told, a thousand souls live on this outpost, named Elizabeth Mercuris after the great English monarch. It’s not pretty, for only the most desperate and wretched of men would chance the surface in order to mine quicksilver and iron. But it’s still a marvel. And in Spacebuckler, there is much afoot there.

We’ve visited two planets. We’ve got four to go, plus a variety of moons and the perilous Rocky Main itself. Stay tuned…!