Star Wars wayback machine: Star Wars (or A New Hope if you prefer) 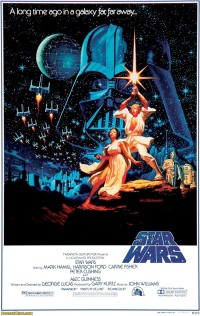 I’ve been reviewing each of the Star Wars movies, starting with the prequels, in anticipation of The Force Awakens on Dec. 17. (I got the first showing nearest my town, naturally.) Everything I’ve seen of the new movie has been positive, and so my cautious optimism is firmly in place.

The original Star Wars, also known as Episode IV: A New Hope if you’re a stickler for such things, is a huge part of why I’m a science fiction and fantasy writer today. I think there are definitely parallels between this film and my first book, The Daedalus Incident, and that’s no accident. Like Lucas, I leaned heavily on Campbell in constructing Daedalus; I often called the book a cross between Master and Commander and Star Wars.

I think the success of the first movie had much to do with Campbell’s hero’s journey. There’s a resonance to those myth-cycles that Campbell correctly identified, and we see ourselves in the characters as they embark on the journey — or in other archetypes of the myth-cycle, depending on where we are in life.

So maybe we’re Luke Skywalker or Princess Leia, central to this story. Maybe we’re Han Solo, the loner sidekick who nonetheless heeds the call. Maybe we’re Obi-Wan, providing wisdom before stepping aside to allow others to build further. Or maybe we’re even Vader himself, drowning in our fear and anger and sorrow until we can find a path to redemption.

These were the thoughts in my head as I watched Star Wars for what seemed like the millionth time. I know this movie by heart. In fact, while in my 20s and firmly in my barfly life-stage, several friends and I recreated the entire movie over pints at the pub. We didn’t miss a line. There are few cultural touchstones so firmly rooted in our global community as this one.

But I’m now looking at it with fresh eyes, and asking myself…is it really any good? Does it stand up to the test of time and the grey clouds of cynicism accumulated with age?

Largely, yes. Enthusiastically, yes. Are there things that I’ve noticed now, years later, both good and bad? Absolutely. Is it dated? Sure, but not as bad as you think. But ultimately, I think it works. The resonance it has in our culture is well deserved.

Why? For one, it seems George Lucas wasn’t fully invested in himself and his vision of Star Wars at this point. It strikes me that he was just trying to make a cool movie on a budget, and as a young director with just one other feature under his belt, he seemed to allow his actors more range and more choices. The dialogue and the acting are much more relaxed, far less rigid and stilted. Is it perfect? No, of course not. But it’s still far better than the prequels.

As far as character, we have folks we can identify with, but with enough nuance and depth to keep us involved with them. I suppose we could take issue with the fact that Leia is essentially damseled for the first half of the film — but then, from the moment she’s rescued, she grabs a blaster, creates an escape route and essentially takes charge. For the time, it’s almost revolutionary; for today’s audiences, it’s still pretty good.

The plot is, blessedly, a very simple thing — and it’s not overburdened with exposition and a need for fan service. We don’t know why there’s an Empire, or who Vader really is, or the underpinnings of the Rebellion. The Empire is evil, plain and simple. The Rebels are the good guys. The Empire created a weapon of mass destruction, and the Rebels are trying to destroy it. The key to success are the plans, which have to be taken to the Rebel base, then used. On the way, hijinks ensue.

That’s basically it, isn’t it? Straightforward quest, the usual detours, some rescuing (and being rescued). Compare this to Attack of the Clones, where we have multiple plot threads woven together inefficiently. The plot of Star Wars doesn’t have room for plot holes. It’s a thin plot, but just enough of one to propel the characters and action forward, and ultimately satisfy the audience.

The setting is just full enough to put us firmly in a happy place, but does not burden itself with too much detail. We hear about the Clone Wars, the evils of the Empire, etc., but we’re not treated to more than that. We’re shown only what we need to be shown to push us through the story. It works.

It’s funny, when you think about it, because so much of what we identify with as being Star Wars isn’t actually in this film. Nobody uses any telekinetic Force powers. The Sith aren’t mentioned at all, and neither is Emperor Palpatine. Even John Williams’ “Imperial March” is absent; it debuted in The Empire Strikes Back. The fact that we see all these things as critical to Star Wars is due in large part because they weren’t crammed in here. They were added in later films and, thus, their impact was more pronounced. The world was built out organically — which is perhaps why the prequel trilogy seemed overladen and overburdened at times.

Ultimately, Star Wars is a very good film. It’s not great by any means, but it nonetheless achieved its iconic status through storytelling and worldbuilding that resonated deeply with the audience and, perhaps more importantly, left us wanting so much more. It was a very satisfying first act that nonetheless raised so many great questions about the universe and those characters that we needed more.

And we got more. Next week: The Empire Strikes Back!

One response to “Star Wars wayback machine: Star Wars (or A New Hope if you prefer)”