A excerpt from MJ-12: Shadows, on shelves next month! 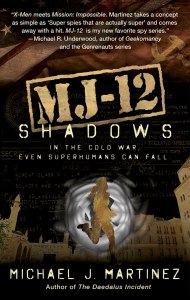 Where does the time go? Actually, I know damn well where it goes — a summer full of hard work, home improvements, family time and various other things. Oh, and writing the third MAJESTIC-12 book in between. (Ha.)

But the second book in that superpowered Cold War spy series, MJ-12: Shadows, is out September 5, and it’s high time I begin letting you folks know what the heck’s going on with it. To be fair, I did give you a sneak peek at some of the cool faux documents we ginned up again — click here if you missed it. And if you want the basic synopsis, here you go:

It’s 1949, and the Cold War is heating up across the world. Operating in the shadows, the Variants–once ordinary US citizens, but now imbued with strange paranormal abilities and corralled into covert service by the government’s top secret MAJESTIC-12 program–find themselves on the front lines of an international crisis.

In Syria, Variant agents have been sent to support a coup by a pro-American army officer. In Washington, a shocking suicide has them fighting for their very freedom. And at Area 51, the operation’s headquarters, the strange interspatial phenomenon which originally granted Variants their abilities has yielded disturbing discoveries.

All the while, dangerous figures flit among the shadows, and it’s unclear whether they are threatening to expose the Variants for what they are . . . or completely destroy them. Are they working for the Soviet Union, or something far worse?

In addition, there’s a couple of reviews up on Goodreads — including one from the gloriously talented Beth Cato (preorder Call of Fire now, it’s really good and it’s out next week). I’m expecting some reviews to land soonish, probably after everyone gets back from WorldCon in Helsinki, which I didn’t get to go to this year, sadly. So far, I’m pleased with what I’m hearing from the people who’ve read it, and there’s a decent consensus going that it could very well be better than the first one, MJ-12: Inception.

But hey, you should judge for yourself. So here’s an excerpt of MJ-12: Shadows to whet your appetite.

The choir at Vienna’s St. Stephen’s Cathedral sounded truly Heaven-sent. Voices of angels, raised in praise of God Almighty, and with a harmony that Calvin Hooks had never even thought possible, his time in the churches of Tennessee notwithstanding.

He supposed they could use a little rhythm, if he was going to be picky about it, but almost immediately chided himself. He was sure God would be plenty pleased with such a hymn.

The church itself had just reopened a couple weeks prior; fires set during the Soviet takeover of the city had severely damaged the ancient church’s roof. And with it being Christmas Eve, there was a fair amount of folks taking ref­uge against the chill outside. Even the hardest hearts, Cal knew, would find solace in a beautiful old church like this on Christmas.

Then a woman walked by, her heels snapping sharply on the checkerboard marble floor, and Cal’s mind immediately shifted. He held a small cigarette case to his mouth. “Got eyes on her, I think,” he whispered. “Walking in now, center aisle, right side.”

The case vibrated twice in acknowledgement. A few sec­onds later, a slight blond man wearing glasses brushed past him to follow. Cal watched him go briefly . . . until he real­ized that the couple across the aisle were staring at him in something akin to shock.

He knew it had nothing to do with his whispering and everything to do with the fact that he was probably one of maybe a half dozen black people in all of Vienna. And it wasn’t like German folk—and Austria, Germany . . . they were kind of all the same to him—were exactly keen on Negroes.

Cal sighed and put his eyes back on the target, the blond man, who had taken a seat one row behind the woman. He had to keep his eyes on the target. His ears, though, he’d save for that Christmas carol the choir was singing. Always good to keep a little bit of the Lord in mind, he thought.

Danny Wallace reached down for the kneeler, then got on his knees and folded his hands in front of him, leaning his arms on the back of the pew in front of him. The woman was less than three feet away. She immediately flinched and shifted, and Danny knew then they had the right target—as if the sensation in his mind wasn’t confirmation enough. She was a flaring beacon now that he’d been able to finally get close enough.

“Nice trick at the vault today,” he said quietly, trying to suppress a smile. “You’re getting pretty daring. You’re also starting to develop a pattern, though, and that’s a problem.”

To her credit, the woman kept herself composed, sitting stock-still with her arms folded and staring straight ahead. “Excuse me?” she said, sounding incongruously pleasant. She was petite and dressed conservatively but quite fash­ionably for church. Danny knew she could afford it.

“You’re rushing things. You think you need to get in and get out, so you’re making messes wherever you go. The bank today. The hotel safe in Davos last week. The museum storehouse in Graz two weeks ago. You’re just reaching in, grabbing for stuff, throwing it aside if it doesn’t interest you. You think you’re going to be interrupted at any moment. But you’re not thinking about what you could do if you were caught.”

The woman cracked a small smile. “I’m thinking about it right now,” she replied quietly. “But thanks for the tip.”

She’s going to run, Danny thought. He reached into his pocket and gave his own cigarette case radio three quick taps, the signal for everyone else to get in position. “You have a pretty unique ability, I’ll give you that. But I also think you’re wasting it on bank jobs and knickknacks.”

The woman’s smile grew wider. “Ah, so you know a little about me, then. And this is where you try to sell me on joining you for . . . what, exactly? Are you a gangster?”

Danny had to stifle a laugh at her pronunciation—she’d obviously picked up the word at the movie house. “Sorry, nothing so glamorous. But maybe something far more exciting. And useful.”

“Ah, a goody-goody,” she replied, another line lifted straight from the silver screen. “Let me guess. You want me to fight for you, whoever you are. Why should I? I like my knickknacks.”

“Because if you don’t, we’ll tell your husband exactly why you left him—and where he can find that car and all his mother’s jewelry you took on the way out. You want that, Julia Meyer?”

The smile finally faded. “My husband is a pig,” she spat. “And his mother is a witch from hell.”

“Good,” Danny quipped. “Come with me, and we’ll cover all your tracks. You’ll have to give everything back you hav­en’t spent yet, but you won’t be on the hook for it. And we won’t tell your family where you are. New life, clean slate.”

“I already have a clean slate,” Julia remarked. “Nobody can connect me to any of those crimes. And you don’t have enough to arrest me—if you did, you would. And you know that handcuffs wouldn’t hold me anyway.”

“I know, Julia. You’re a Variant. Over the past couple years, you’ve developed a kind of Enhancement that allows you to do extraordinary things. Did you ever in your life imagine that one day you’d be able walk right through walls, to reach through doors without opening them? You’re like a ghost. It’s a pretty incredible ability.”

She continued to stare straight ahead, but her eyebrow cocked up a bit. “A Variant? Is that what you call—do you mean there are others like me? People who can walk through walls?”

“There are others like you, but you’re the only one I’ve met who can do what you do, Julia. But we Variants, we can do extraordinary things.”

Julia stood up and made to leave, but Danny glanced over and saw that Frank had taken a seat at the end of the pew and was looking hard at the woman. On the other side, Cal had just taken his place, effectively blocking her in.

“We’re not here to arrest you, Julia, but we’re not going to let you go, either. Your best option is to come with us and we’ll get everything ironed out for you,” Danny said as he stood. “Let’s not make a scene.”

She turned to face him directly for the first time. “There won’t be any scene.”

And with that, she fell straight through the floor.

Danny punched his radio key four times, then bent over to quickly pick up all her clothes. “I hate it when they run,” he muttered.

So there you go. MJ-12: Shadows is out September 5, so be sure to preorder. And if you didn’t get Inception when it came out last year, it’s now in paperback so it’s super-affordable, because I like you.