The Gravity of the Affair now available! 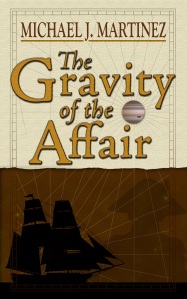 The Gravity of the Affair is officially released today, and available via Amazon, Barnes & Noble, iTunes, Google Play and Kobo! (I expect links for the Audible.com audiobook to go live later today.) It also has its own Goodreads page, complete with a fresh review!

As a reminder for newcomers here, The Gravity of the Affair is a novella set in the Known Worlds of The Daedalus Incident. It follows the young post-captain Horatio Nelson, destined to become England’s greatest naval hero, during his first command sailing on the seas of Ganymede and Europa. When his first engagement with the enemy ends in defeat, he must face up to his failure — as well as a formal board of inquiry.

Will Nelson fulfill his destiny? Or will his actions in the Void ’round Jupiter snuff out his career before it begins?

The Gravity of the Affair is available in e-book for around $2.99, depending on the vendor, and will be up on Audible soon. You don’t need to have read The Daedalus Incident to enjoy the novella; if you have, though, you’ll see some nuggets of interest there. If you haven’t, it’s a great introduction to the worlds of the Daedalus series, if I do say so myself.

To celebrate the launch of this latest bit of work, I’ve written a guest post today over at the Hugo award-winning SFSignal, wherein I discuss world-building as a series evolves from a stand-alone novel. Check it out!