Everything about the The Enceladus Crisis in one handy post! 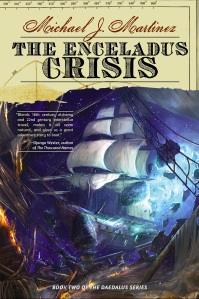 There’s only a few days left before The Enceladus Crisis hits bookshelves, so I thought it’d be good to have all the pertinent info about the book and my other work in an easy-to-reference post — especially for folks stumbling across this blog, and my books, via the guest posts, excerpts and interviews coming over the next few weeks. Click on the book titles for summaries and jacket copy and fun stuff like that. So…here we go.

The Enceladus Crisis, published by Night Shade Books, is the sequel to The Daedalus Incident, my debut novel. Publishers Weekly called Enceladus “rivieting…a uniquely imaginative science fantasy tale,” and SFSignal said “the sequel continues the first novel’s mix of alchemy, intrigue, mystery, science fiction and high adventure into an entertaining package.” GeekDad and Amazing Stories liked it too. You can get The Enceladus Crisis at Amazon, Barnes & Noble, Kobo, iTunes, Google Play and through your local independent bookseller (check out IndieBound for your nearest indie bookseller). The audiobook is available via Audible, too. 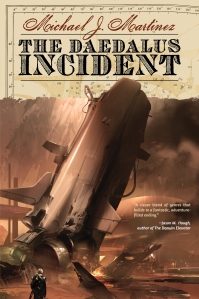 The Daedalus Incident, for its part, turned out to be a pretty good debut, having been named one of the best SF/F books of 2013 by Library Journal and BuzzFeed. Folks seemed to like it. Now, do you need to read The Daedalus Incident before reading The Enceladus Crisis? I wrote Enceladus with enough callbacks to the first novel so that, if you stick with it, you won’t need to read Daedalus to enjoy it. That said, I do think folks who read Daedalus will have a leg up. That’s pretty normal, though, when it comes to series. Click here for a list of vendors carrying Daedalus, including e-book and audiobook.

So far, Daedalus and Enceladus are the two official books in the Daedalus series. The third, titled The Venusian Gambit, is due out next year, and I’m in the midst of writing it now. There’s also a self-published e-novella, The Gravity of the Affair, that’s set in the Known Worlds of the series, but it’s a stand-alone story. It’s on sale for $0.99 right now, and I’m not sure how long I’m going to keep it there, so get cracking. There’s also an audiobook version of Gravity as well.

So there you have it. Thanks for stopping by, and enjoy the books!

4 responses to “Everything about the The Enceladus Crisis in one handy post!”