Click here for an excerpt of the novel, published over at io9.com, and there’s a second excerpt via Tor.com.

Two dimensions collided on the rust-red deserts of Mars—and are destined to become entangled once more in this sequel to the critically acclaimed The Daedalus Incident.

Lieutenant Commander Shaila Jain has been given the assignment of her dreams: the first manned mission to Saturn. But there’s competition and complications when she arrives aboard the survey ship Armstrong. The Chinese are vying for control of the critical moon Titan, and the moon Enceladus may harbor secrets deep under its icy crust. And back on Earth, Project DAEDALUS now seeks to defend against other dimensional incursions. But there are other players interested in opening the door between worlds . . . and they’re getting impatient.

For Thomas Weatherby, it’s been nineteen years since he was second lieutenant aboard HMS Daedalus. Now captain of the seventy-four-gun Fortitude, Weatherby helps destroy the French fleet at the Nile and must chase an escaped French ship from Egypt to Saturn, home of the enigmatic and increasingly unstable aliens who call themselves the Xan. Meanwhile, in Egypt, alchemist Andrew Finch has ingratiated himself with Napoleon’s forces . . . and finds the true, horrible reason why the French invaded Egypt in the first place.

The Enceladus Crisis is now available at  Amazon, Barnes & Noble, Books-A-Million, Kobo, iTunes, Google Play and IndieBound, with the audiobook version available at Audible. Most non-U.S. vendors carrying English-language titles also have it.

Here’s the back cover, where people say nice things about it: 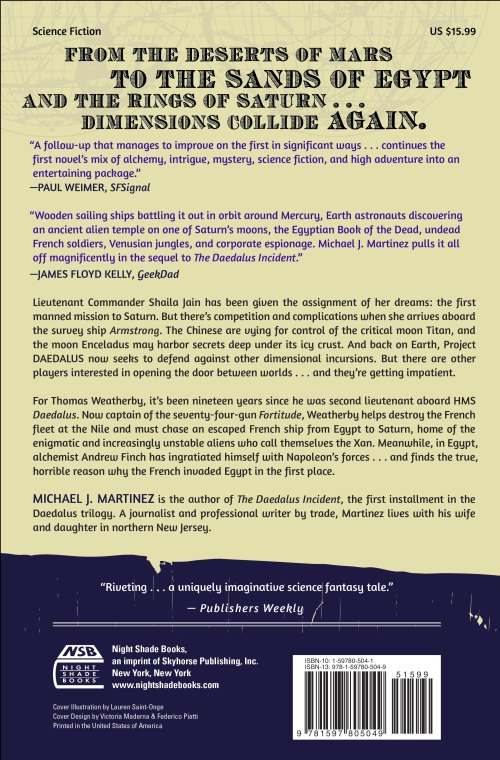