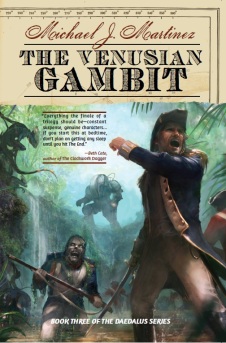 The last chapter of the dimension-spanning Daedalus series brings the 19th and 22nd centuries together for an explosive finale in the jungles of Venus!

“Overflowing with complexity and eloquence, the conclusion to Martinez’s Daedalus Trilogy (following The Enceladus Crisis) seamlessly blends popular elements from science fiction and fantasy, producing a work that raises the bar for both.” — Publishers Weekly (starred review)

“Everything the finale of a trilogy should be — constant suspense, genuine characters…. If you start this at bedtime, don’t plan on getting any sleep until you hit The End.” — Beth Cato, author of The Clockwork Dagger

In the year 2135, dangerous alien life forms freed in the destruction of Saturn’s moon Enceladus are making their way towards Earth. A task force spearheaded by Lt. Cmdr. Shaila Jain is scrambling to beat them there while simultaneously trying to save crewmember Stephane Durand, who was infected during the mission to Saturn and is now controlled by a form of life intent on reopening a transdimensional rift and destroying the human race. But Jain doesn’t realize that the possessed Stephane has bigger plans, beaming critical data to other conspirators suspiciously heading not for Earth, but for Venus…

In 1809—a Napoleonic era far different from our own—the French have occupied England with their Corps Eternélle, undead soldiers risen to new life through the darkest Alchemy. Only the actions of Lord Admiral Thomas Weatherby and the Royal Navy have kept the French contained to Earth. But the machinations of old enemies point to a bold and daring gambit: an ancient weapon, presumed lost in the jungles of Venus.

Now, Weatherby must choose whether to stay and fight to retake his homeland or pursue the French to the green planet. And Shaila must decide if it’s possible to save the man she loves, or if he must be sacrificed for the good of two dimensions. In the dark, alien jungles of Venus, humanity’s fate in both dimensions hangs in the balance—forcing past and present to once again join forces against an ancient terror.

The Venusian Gambit is now available for print pre-orders at Mysterious Galaxy, Books-A-Million, Barnes & Noble, Amazon or Amazon UK and Chapters in Canada. E-book and audiobook pre-orders will become available closer to the May release date.

One response to “The Venusian Gambit”