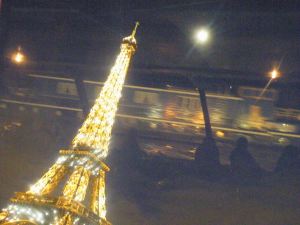 The Eiffel Tower and the Moon, with the reflection of our boat on the window. Kind of a cool shot, totally taken by accident.

My wife had heard this NPR story about an exhibit by an artist whose work was created — and displayed — on iPhones and iPads. My daughter uses the same app to draw whenever she appropriates my iPhone, which is often. In fact, one of her iPhone pictures was displayed at Rockefeller Center this Christmas as part of the building’s children’s art program for the people who work there.

Long story short, we did something incredibly impulsive and quite lovely — we booked a trip over the long weekend, leaving Thursday and coming back Monday. That gave us about two-and-a-half days to explore the city. I’d never been, but my wife visited in college. And, of course, my daughter’s six, so it was new to her too.

The exhibit, of course, was amazing. The Brushes app for iPad allows you to actually “play back” the drawing process, which was facinating. It was like watching that old film of Picasso painting on glass, but on steroids (and without the artist present). There were easily several dozen drawings on display, and my daughter used my iPhone to sketch three of them, drawing the admiration of at least one French fellow who was amazed to see a little girl deftly flipping through the app as she drew. Yes, proud daddy moment there.

And, of course, we did the rest of Paris, or as much as you can do in a few days. Eiffel Tower? Check. Notre Dame? Oui. Champs Elysses and the Arc du Triomphe? You betcha. Boat ride on the Seine? Oh, yeah. We even got out to Versailles, which was facinating. No wonder the French people got fed up; Louis XVI was living in serious style, while the people in Paris were struggling to eat. There was a lot of ego that went into that palace.

We didn’t hit the Louvre, which some may find a travesty. But the damn thing is a massive, massive place. And it gives me an excuse to go back.

Overall, it was a crazy, whirlwind experience. And it left me utterly exhausted with jet lag, which is my only complaint about the entire trip. I think next time we do a spontaneous weekend somewhere, it’ll be somewhere that doesn’t require the redeye flight!