The alchemy of writing 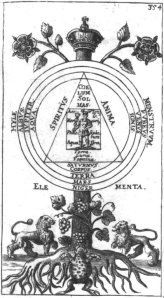 A really old-school approach to writing?

Alchemy — lead into gold, right? Take something common and turn it into a treasure. It works for writers, too. Take an idea and work your magic, transforming it from a mere notion into something that can transform the reader’s imagination.

The ancient Art of Transformation plays a big part in my novel’s setting, but it’s not a bad metaphor for the craft of writing. I had the germ of the idea: I wanted sailing ships in space, and I wanted to do it right. I had to take that little nugget, break it down and build it back up into gold. And it started with a single question. Exactly how am I going to have sailing ships in space?

I had a few options, certainly. I could’ve gone steampunk, which in 2003 was interesting and fun and new, but didn’t quite fit the late 17th century vibe I was going for. I could’ve gone all Dungeons & Dragons on it and just said pure magic was responsible. But seemed like an odd fit as well, plus D&D actually did something like that back in the ’80s.

I bounced my idea off a dear old friend, one who’s made a study of both history and mysticism, and we ended up with the notion of the Great Work — alchemy. From the Renaissance through the early 19th century, alchemy was considered a valid science; indeed, some felt it was the science, the font from which medicine, physical science, chemistry and even astronomy followed. It was steeped in mysticism, yet relied on rigorous logic as well.

Adding alchemy into the mix resulted in a vibrant world, one that used real history as a basis for something fantastical, wonderous and new. Plus, as I researched, I found a number of really interesting historical figures involved in alchemy and its attendant mystical traditions. Three of those historical figures are now important characters in my book, and ultimately alchemy itself became central to the plot.

When it comes to writing, I think the Art of Transformation happens when you ask smart questions about your setting, your plot and your characters. How does this work? Why would this happen? How would someone react in this circumstance? Applying that logic to your inspiration can be, well…transformative.