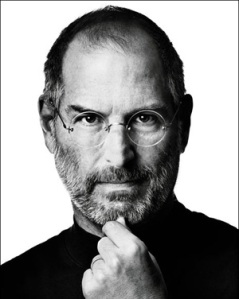 Back during the dot-com days, when I was covering Microsoft in Seattle for ABCNEWS.com and The Associated Press, there was one sure-fire way to get the Microsofties going during interviews — mention Steve Jobs and/or Apple. It was like winding up an old mechanical toy and watching it go. This worked particularly well on Steve Ballmer, I might add.

I’m not one to use the word visionary lightly, because I’ve seen it applied too many times to too many people who didn’t deserve it. But I think Steve qualifies. Now, let’s be clear. He didn’t cure disease or fight poverty. He was a sharp, shrewd businessman who wanted his company to succeed. But he was still a visionary when it came to figuring out how you and I should interact with our computers, our devices and our data.

And in doing so, he may very well have had the greatest impact on human evolution any single person could have in one lifetime.

How so? According to a recent study, the advent of personal technology is changing the way our minds work, particularly when it comes to memory. We used to have to remember a lot of salient facts, because we had no easy reference for them. Now, all we have to do is remember where we stored the data, or what search engine keywords we used. The products and services that have become Apple’s hallmarks are driving huge changes in the way we approach our daily lives, and could very well have a lasting effect on how our minds work.

Apple may not have been first-to-market in, well, anything. But it was usually best in the marketplace. There were personal computers before the Macintosh. There were digital music players before the iPod. Microsoft was doing tablet computing 10 years before Apple. And there were plenty of smartphones before the iPhone. But Steve Jobs knew us all too well. More than his technical prowess or his design sensibility or his marketing genius, Steve knew how we needed to interface with technology.

From the computer to the phone to the tablet, Steve wanted his technology to become part of us, and it has.