A tour of the Known Worlds: Mercury 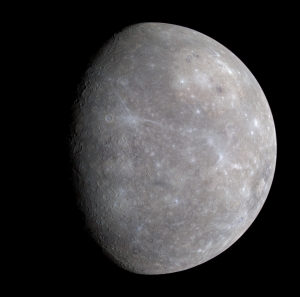 When we last left off on our little tour of the Known Worlds (as featured in Spacebuckler) we had just explored the mysteries of cloud-shrouded Venus. Next up: Mercury, the sunniest spot in the solar system. This appellation is not a good thing, mind you.

The real planet Mercury is a small ball of superheated rock just 36 million miles from the sun (on average). On the sunny side, temperatures reach up to 800 degrees Fahrenheit. On the dark side, eternally pointing away from the sun, temperatures hover around minus 280 degrees. And you can forget about any meaningful atmosphere — the few gaseous atoms not blasted into space by the solar winds aren’t exactly breathable. Of course, you’d either freeze or fry anyway.

Obviously, in a “hard” science fiction world, Mercury isn’t all that exciting. Yes, scientists believe there may be some water ice on the dark side, along with various and sundry ores. But it’s a tough place to hang out for any period of time.

Thankfully, parts of Spacebuckler are decidedly fantastical, and Mercury has lent itself to a more generous interpretation. The Roman god Mercury was the deity of speed, communication and trade. His Greek cousin Hermes had aspects of trickery, thievery and, perhaps most important of all, magic. It was Hermes Trimegistus, after all, who laid down the foundations of Western occultism, through which High Alchemy was refined. And it’s Alchemy that allows the men of Earth to explore the Known Worlds in the first place.

So when thinking of Mercury, I knew it had to be important. I couldn’t quite make it a garden spot, mind you — it’s still hot on the sunny side, cold on the dark side. But with Alchemy in play, I figured the planet’s ores would be highly valuable indeed. If you look at the history of medieval alchemy and post-medieval science, you’ll find that quicksilver — a.k.a. mercury — plays a big role. So between the planet’s material wealth and its mystical/alchemical potential, I knew the Great Powers of Europe would seek to colonize and exploit Mercury.

But how? The sunny side is still too hot, and the dark side is rather grim. That’s when I hit upon an idea for something different — the late 18th century equivalent of a planetary outpost…which I’ll talk about next time.