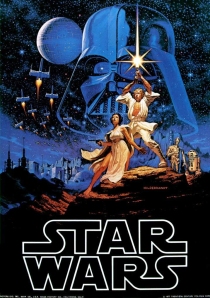 Personally, I consider Star Wars a major inspiration for how I write. I know it’s fashionable in geek circles to whack Star Wars for its simplicity. (It’s also fashionable to whack it for its stilted dialogue and Jar-Jar Binks, and I totally agree with those points.) But like Carter, the story wasn’t in the setting, but in the story and characters. Yes, we all love lightsabers, the Force and the Millenium Falcon, yet the story wasn’t about those things. It was rooted in the story about a farm boy forced by circumstance to be a hero and, ultimately, redeem his father.

Yes, the story’s an old one, and in any other setting, it may have seemed trite. But by the same token, an alien universe like the one in Star Wars could’ve seemed too confusing and cluttered if you didn’t have a story that grabbed the audience.

It’s that balance, between setting and story, that I try to find in everything I write. As you’ve seen in our tour of the Known Worlds, I’ve put a lot of thought into the setting of Spacebuckler. But there’s an equal amount of thought that went into the story and the characters as well, because without a great story, the reader doesn’t really care whether there are ancient ruins on Mars or cities on the rings of Saturn. (And there are.)

So thanks, Star Wars, for showing how it’s done. And as for John Carter the movie, I haven’t seen it yet, and will probably catch it on DVD or On Demand. It’s a shame, because I wanted to get more excited about Carter, but it seems like the movie’s become a victim of the book’s success decades ago.