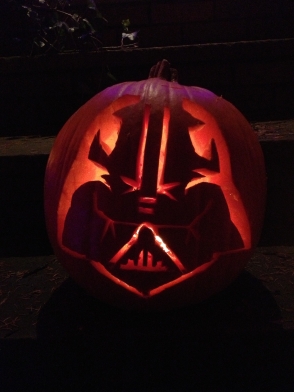 Will Darth Pumpkin turn into a carriage for Cinderella?

I had no idea that the Mouse House was going to buy Lucasfilm Ltd. when I started carving this bad boy. Had I known, I might have carved some mouse ears on it.

Yep, it’s big news. George Lucas gets to set a course for Easy Street strapped to a serious hyperdrive, in the form of $4 billion in cash and Disney stock.

But for everyone freaked out about the corporate takeover of a beloved icon…dude, you saw The Avengers, right?

Here’s the thing. I worked for an arm of the Mouse House for nearly three years, when it was going through some painful lessons surrounding the Internet. (Remember Infoseek? Go.com?) Disney learned the hard way that it can’t use the Mouse as a battering ram to enter markets. Not everything can be shoehorned into the Disney Way.

I remember sitting across from Michael Eisner, when I was still a wet-behind-the-ears reporter, talking about those lessons. Eisner was pretty quick to recognize the power of letting people do what they do best — at least when it came to the creative side. Remember when Disney took over ESPN and everyone freaked that sports would become more cartoonish? Aside from the recent play of the New York Jets, cartoonish hasn’t happened. Disney let ESPN be ESPN, not Sports Disney.  Eisner’s successor, Bob Iger, continued that policy, but with a higher degree of geniality.

Look at Pixar. Yeah, they whiffed on Cars 2. But in general, they do excellent work unencumbered by their corporate overlords. Same goes for Marvel and all the Avengers films. They basically gave Joss Whedon the keys and said, hey, go do what you do. And the man racked up a cool $1 billion or so on his film. (Joss is also politically active in his spare time.) Heck, they even had doubts about Johnny Depp’s Jack Sparrow, but ultimately let him go ahead with his portrayal.

Disney has a great track record with creative folks, and I expect the same here. Indeed, they pride themselves on keeping or bringing in the people with the most credibility to do their projects. So yeah, they’re going to do Star Wars Episodes VII, VIII and IX. They may do even more. That long-delayed Star Wars live-action TV series might finally get off the ground (on Disney-owned ABC, of course).  But for all the volume of new Star Wars material we can expect over the next decade, I’m willing to bet Disney will be hands-off in terms of the creative direction.

In other words, I’m kind of looking forward to Episode VII. Heir to the Empire, anyone?