If a book launches in the woods…. 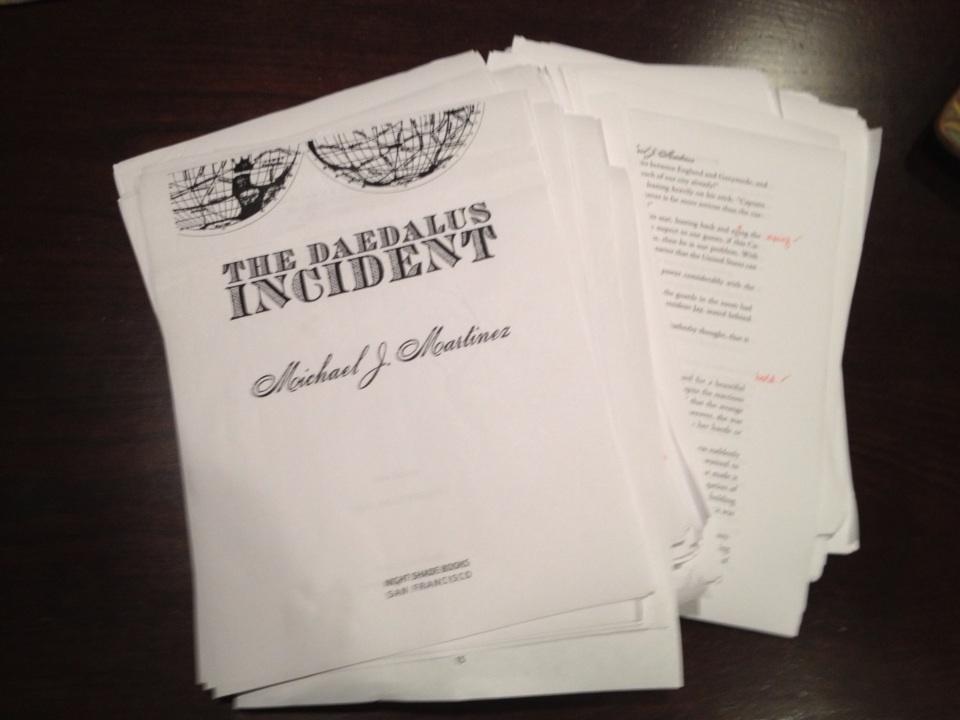 Why yes, this is what the book will look like inside.

Been a few weeks since I posted here, and for that I apologize. If you’ve followed my Twitter feed, you’ve seen a similar lack of communication, punctuated by a long weekend in Montreal in which I Tweeted EVERYTHING. So, you know, I hope that was entertaining.

Some of that dearth of communication had to do with the fact that I had to go through the copyedits to The Daedalus Incident. That was fun; I hadn’t really gone through the book in a few months, and it was nice to visit the characters again. At this point, for me this book is like that favorite movie you watch over and over again because you love it and it’s become your mental Snuggie.

I’m really excited for this sucker to get out in to the world so people can read it. In fact, I’m tempted to tell you all about it RIGHT NOW. But I really can’t do that, because I really need to save my powder for the April-June time frame. That’s basic marketing 101. I mean, if you’re reading this, chances are you’re a blog and/or Twitter subscriber or a real-world friend, and have been with me on this particular ride for a while. I’d like to think you’ll buy the book — if you haven’t pre-ordered it already.

It’s everyone else I need to think about. Because if a book launches in the woods…well, it does make a sound. You just want people to hear it.

To me, there are basically two phases of a book launch: There’s the run-up to the launch to try to ensure a strong first few weeks of sales, and then there’s the effort to sustain sales for the long term. That first part involves the usual suspects, such as blog interviews, guest posts, media outreach and — perhaps most importantly — the reviews. This is where you generate interest and excitement and convince tastemakers and early adopters to buy the book.  These folks are generally the True Believers, the ones who really like reading SF/F and follow it avidly, the core fan base. If you’re one of these, I love you guys. I love the enthusiasm. I love the passion for it. Most SF/F writers are part of that core fan base as readers, too, so we know what it’s like.

Of course, if you want your book to be successful beyond that first week, you’re going to want continued sales. First and foremost, that means writing a good book, and at this point, there’s nothing more to be done for that. Either it’s good, or I’ve deluded myself — along with my agent and the good people at Night Shade Books. Actually, it needs to be more than merely good in order for those initial buyers to recommend the book to others. It’s the all-powerful word-of-mouth, now fueled with Facebook and Twitter. If you start getting some of that, you’re starting to get somewhere.

But you still have to add to the conversation, and that means additional work after launch. You’ll need more blog interviews, podcasts and guest posts, along with convention appearances and the like. It means ensuring that every single person in your core audience has at least heard about the book and, ideally, getting them to give it a shot if they haven’t already. If you get enough core audience members reading, then you have a shot — not a great shot, mind you, but a shot — of reaching a wider readership.

So…that’s a lot of marketing ramble. What’s this mean for The Daedalus Incident?

It means a few more months of relative silence, for starters. That’s not simply because I’m saving ideas and topics, but also because I’m working on something special to celebrate the launch. Yes, it’s a piece of writing.  Yes, it’s set in the Daedalus universe. Yes, you’ll read more about it in the weeks to come. And yes, it may be available free…for a limited time, of course.

Next month, you’ll find me blogging weekly on Night Shade Books’ author blog, The Night Bazaar. They do a great job of posing thoughtful topics and questions there, and I’m looking forward to the conversation.

Starting in mid-March, you’ll see more stuff start to creep out there. A guest post here, an interview there. We’ll also be getting ARCs (advance reader copies) into reviewers’ hands by then, and I may even have a giveaway as well. In early April, I think that bit of writing I alluded to will be ready for your consumption. The book reviews will likely hit in mid-April and beyond, and around that time I’ll be ramping up my own outreach as well. There’s already one fairly large bit of media in the bag that I’m pretty excited about, along with some guest posts on some pretty well-trafficked sites.

On launch day, I will likely Tweet nothing but incoherent blather, because I’ll be alternately euphoric or weepy. Figure I’ll set that bar low now.

Afterward, I’ll continue a steady, though less intensive, stream of guest posts and interviews. I’m hoping to attend a few conventions over the spring and  summer, particularly WorldCon in San Antonio in late August. Again, the idea is to remain in the conversation.

Of course, while I do all this, I’ll be writing the next book. But that’s a nice problem to have.

So there you have it. If you’re a fellow writer, I hope this gives you a bit of insight into the joys of launch-time as well as marketing planning. If you’re a reader just looking forward to the book, well…I hope you’re not sick of me come May.