An American SF/F writer in Japan

In Japanese, Mt. Fuji is called Fuji-san, a term of respect. Appropriate, I think, for a massive volcano.

It’s Monday morning here in the land of the rising sun, and I can see Mt. Fuji over my shoulder as I write this. I’ve been lucky enough to get my travel on regularly, but this is the furthest I’ve ever traveled — and the first place where I can’t read the language, let alone speak it. Thank God for Google Maps and Google Translate on the iPhone. That and a data-roaming add-on package will get you far almost anywhere, I imagine.

In no particular order of importance, relevance or insight, here’s a few thoughts from the trip so far.

I’m living inside a 1980s video game. Japan sounds different. Most every interaction with a machine is accompanied by a string of electronic melodies right out of a video arcade. Subway doors, the change you get from a 7-Eleven register, you name it. It’s amazing how much sound can add to an exotic experience. The Shibuya district in Tokyo has the same stores you’d see on Fifth Avenue in New York or the Champs-Elysees in Paris. But man, it sounds very different, and it’s not just the language.

Fashion tribalism is alive and well. Young Japanese can be easily identified by their clothes. Few are outright punks, though those exist, but there are hipsters of various stripes, fashionistas of every variety and enough strange accessorizing to make you realize that every culture, everywhere, has its own ways of visually relating to one another through clothes. I don’t know what wearing stockings with short-shorts means, per se, but I see enough of a subset of women doing it to know it’s a thing. Same with young men wearing pork-pie hats or t-shirts with angry English slogans on them.

This is where you wait for the subway. Exactly right there, where the feet are.

There are rules for everything. This is where you stand while waiting for the subway. Don’t rush onto the subway, either. Seating areas in the car are specifically designated for women or old people. The funny thing is, people abide by these rules without exception. Can you imagine the MTA telling New Yorkers how to ride the subway? But there is a right way to do things in Japan, and everyone strives to do it right.

Pride in accomplishment, and tipping is insulting. Related to the above, the folks we’ve encountered, from hotel staff to cabbies to cash register workers, take far more pride in service than folks in similar roles in the U.S. take. I’m reminded of an AP story I wrote early in my career on the Zen Buddhist monastery up in Mt. Tremper, N.Y. One of the pillars of Zen Buddhism is “right work,” meaning that a harmonious, complete job well done gets to closer to harmony with the universe (or something like that). Point is, there’s little slacking, it seems. In that vein, tipping is considered to be in poor taste, because it implies the worker only did a good job in order to make extra money.

Surgical masks. Between SARS and avian flu and such, we’ve all seen plenty of pictures of urban areas in Asia with lots of people wearing surgical masks. However, try as I might, I can’t identify the rhyme or reason for it. It’s not like everyone’s wearing them, maybe no more than one in twenty here in Tokyo. But they run the gamut between old and young, men and women, hipsters and salarymen. Plus, they’re taken on and off with seemingly no accounting for the actual health benefits. Heck, we saw a guy with his mask pulled down around his neck so he could have a cigarette out in public. I’m not even sure if they’re worn to protect other folks from the wearer’s germs, or to protect the wearer from everyone else’s germs. Sometimes, it even seems to be just a thing people wear without actual regard to health. 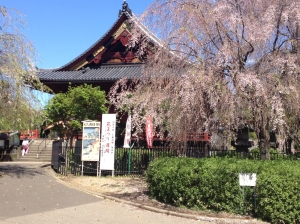 Stunningly beautiful temple, and the cherry blossoms are lingering this spring.

These are just a few of the things that have stood out in my writer-mind. Sights and sounds, cultural mores and attitudes, trends and oddities — they’re all interesting to think about in terms of world-building in genre fiction. Not to say I’m going to clone Japan in anything, but the differences stand out, and that’s really useful.

Meantime, I’m in Japan all week, having a blast, heading to Kyoto this afternoon to get a bit more culture and history. And I gotta find more sushi because, even though I’m not a huge fish guy, the sushi here is (understandably) amazing.

2 responses to “An American SF/F writer in Japan”