Long-time readers of this blog will have noticed a spate of unusual photos, posted without explanation since April, that teased…something. With the  MAJESTIC-12 series officially announced, I can safely say that these photos are hints as to the first book, MJ-12: Inception, due out next fall.

And as promised, here’s the explanation of what they are. 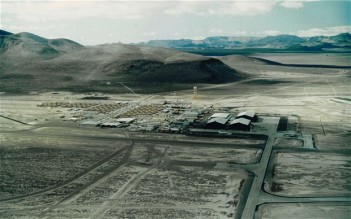 This is indeed the famed Area 51, located in Groom Lake, Nevada. The super-secret military facility started simply as a reserve Army Air Force base called Indian Springs during World War II, and in our history, it became a testing ground for a wide variety of classified aircraft projects, including the Lockheed U-2 spy plane and the F-117 Stealth Fighter.

It’s also a part of UFO lore, being the secret base where the government allegedly houses and reverse-engineers alien technology. In MJ-12: Inception, Area 51 is…well, it’s in the book, and that’s all I’m saying about that.

At the headquarters of the Central Intelligence Agency in Langley, Va., there’s a white marble wall with 113 stars carved into it — each star representing a CIA officer who died in the line of duty. Just under it, the Book of Honor lists the names of each officer…except for 33 of them who, for the time being and possibly in perpetuity, must remain anonymous.

The Langley building was dedicated in 1961, and the CIA was headquarted in Foggy Bottom, Washington, prior to that. Thus, in MJ-12: Inception, there is no Memorial Wall. Yet.

In what was formerly East Berlin, the Communist leadership of East Germany erected a memorial to fallen Soviet soldiers from World War II. The massive memorial consists of several statues and tons of marble and stone, the latter coming from the demolished Reich Chancellery. The memorial still stands today in honor of the Soviet soldiers — and there were hundreds of thousands — who died to help defeat the Nazis.

To me, this image (part of one of the statues at the memorial) encapsulated the beginnings of the Cold War: the defeat of Nazi Germany and the rise of the U.S. and Soviet superpowers. And there was no battleground quite like Berlin from 1945 to 1989.

You can’t write a Cold War spy series, paranormal or not, without gadgets. Seriously, they would come for me if I didn’t have something fun in there.

Now, the gun pictured here is a bit outside my series’ time frame, having been used by the KGB circa 1965, but man…it’s a lipstick gun. Single shot, 4.65 mm caliber. Probably one of the coolest spy gadgets I’ve heard of, barring those I’ve created for MJ-12: Inception. 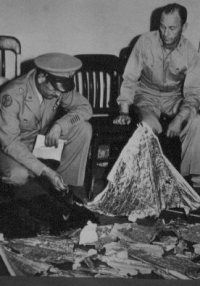 How do you do a series based on the MAJESTIC-12 UFO conspiracy and not include a bit about Roswell — the incident that started it all? In July 1947, the Army recovered…something…from a field outside Roswell, N.M. Initial reports said it was a flying disc of some sort, and this was later revealed to be a high-altitude balloon carrying a microphone that would, apparently, listen for Soviet nuclear tests.

As you can see from the MAJESTIC-12 press release we put out, there’s not a lot of mention of UFOs. That is deliberate. Why? I ain’t telling.

This dour-looking fellow is former Secretary of Defense James Forrestal, who served under President Truman in the late 1940s. According to conspiracy lore, he’s also an original member of the MAJESTIC-12 cabal. (Naturally, there were 12 such members, though they served at different times, apparently, so the whole twelve thing is just…weird.)

For the record, I believe the conspiracy thing to be nonsense. However, as an author of historical fantasy, how could I not leverage the MAJESTIC-12 membership? So yes, Secretary Forrestal will make an appearance in MJ-12: Inception.

Finally, we have the alleged smoking gun for UFO mythologists: the memo signed by Harry Truman authorizing MAJESTIC-12. Analysis and research has led most folks to conclude that this is probably fake. Thankfully, so is fiction. Thus, you can rest assured that this memo has a very strong chance of appearing in the first book of the new series.

If you want more about the whole MAJESTIC-12 conspiracy thing, I suggest the Wikipedia page as a good start. You may then feel free to speculate what, if any, the connection might be between that and the MAJESTIC-12 covert operations program I’ll be featuring in the new series.

I mean, heck, you’ll probably be wrong. But you can speculate.