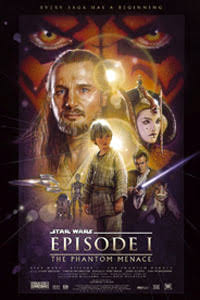 I am very much a Star Wars fan. I saw the very first one in the theater at the tender age of five, and I still remember freaking out as Vader was about to off Kenobi, hands over my face but watching between my fingers. I’ve seen all six films in the theaters, and Timothy Zahn’s Thrawn trilogy was awesome. Admittedly, I’ve not kept up with the rest of the EU-now-Legends novels, nor with Clone Wars or Rebels. But I do love my Star Wars.

In fact, I’d venture to say that I wouldn’t be a SF/F writer today if Star Wars hadn’t lit my imagination on fire back in 1977. And yes, I have tickets pre-ordered to see The Force Awakens on Thursday, Dec. 17, at a local theater. It’s on, people. It’s ON.

So to prepare for the return of Luke, Leia, Han and Chewie, I’ve started rewatching all six movies, in episodic order, while I’m huffing and puffing on the elliptical each morning. And I’m going to blog some thoughts about each of them when I’m done. First up, Episode I: The Phantom Menace.

First, let’s get one thing out of the way. This is not a good movie. It’s my least favorite of all six films, and on my rewatch it was really tough to finish. The entire movie exists to establish two relationships — Anakin and Obi-Wan, and Anakin and Padme. The rest is padded-out filler. Now, that’s not necessarily a problem, so long as the filler was highly entertaining. But it’s not. and the third key relationship — Anakin and Palpatine — doesn’t even start until Episode II. So The Phantom Menace ends up being a phantom movie, with about 10 minutes of real impact on the entire Star Wars saga.

The A-plot of the prequels is Anakin’s rise to power as a Jedi, and his subsequent fall from grace to the Dark Side. This movie advances the A-plot by introducing Anakin, having him meet the key people in his life, and making him a padawan. There’s some poorly written asides about midichlorians and Anakin being the Chosen One in there. (My God, can we just toss the Chosen One trope for a while? I’m much more of a fan of the random-person-lands-in-crap-and-rises-above-it trope.) And that’s it. Seriously, that’s all this movie does to advance the Skywalker family saga. It’s punching way below it’s weight.

The whole prequel sequence’s B-plot is the fall of the Republic and the rise of Emperor Palpatine. Theoretically, Phantom Menace is about the first moves in Palpatine’s bid for power. How does taxation and trade routes, along with the subjugation of his home world, play into Palpatine’s game plan? Tough one, because his gambit was about putting the Trade Federation, rather than Queen Amidala, in charge on Naboo. That failed, and Palpatine’s apprentice (the incredibly cool and criminally underused Darth Maul) is offed in the process.

Palpatine does indeed become chancellor at the end of all this, but how could that have been his main goal? Did he know the Trade Federation and its droid armies would fail in their conquest of a peaceful, pastoral planet? I doubt it. He didn’t want Padme to escape Naboo, didn’t want to send Maul to track her down. He was reacting to failures there. I think he was nimble, certainly, and jumped at the chance to leverage the Naboo crisis to become chancellor, but to say that was his main ploy is a huge stretch.

Basically, then, the B-plot advance here is that Palpatine’s plan went south, but he adapted quick and ended up in a far better place than he could’ve imagined. The bummer is, we don’t even get to see him really assess that political calculus. It just happens, and there he is as chancellor. All right then.

This is basically a movie that’s supposed to remind us of the first trilogy, but does very little to actually create an origin story for those older movies. Instead, we have attempts at nostalgia. Look, Jedi! Lightsabers! The Force! Spaceships and space battles! But even there, we have problems. Such as:

Now, I think they got Padme right. She’s a character with agency and is basically leading the charge to fight off the invasion of her homeworld. Given how badly she’s marginalized in Episode III, it’s at least nice to see her front-and-center and in charge here. I think the overall casting is excellent, if ultimately wasted. (I think Jake Lloyd was fine, frankly. Kid just needed better lines, better stuff to do.)  And of course, John Williams knocked it out of the park on the score, as per usual.

Long story short, Phantom Menace could’ve been a great origin story for Anakin and Obi-Wan, but was ultimately a wasted film. Its heart was in the right place, but a thin plot, poor writing and misplaced fan service dragged it down.

At least things get a little better. Next up: Episode II: Attack of the Clones.

One response to “Star Wars wayback machine: The Phantom Menace”