I’ve been in my current day job now for nearly nine years. In addition to the gig’s intellectual challenges, sturdy rewards and lovely people, it’s allowed me to visit Los Angeles at least…heck, 25 times or so? See, the New York office is actually the satellite, while the mothership is in the City of Angels. Hence the travel and the sturdy flow of frequent flier miles.

So here I am yet again, this time for a week and a half. My wife is with me (the child being at camp) and there are plans afoot. L.A. is a great city for warmth, sun, beaches and sightseeing. (The less said about traffic and smog, the better.) The food scene here is phenomenal — super creative, far less pretentious than New York, and surprisingly affordable. There are many fine craft breweries.

And there’s The Last Bookstore. I’m ashamed to say that I hadn’t visited until today. This has been belatedly but duly rectified; it’s one of the coolest independent bookstores I’ve ever seen. Want proof? Here you go. 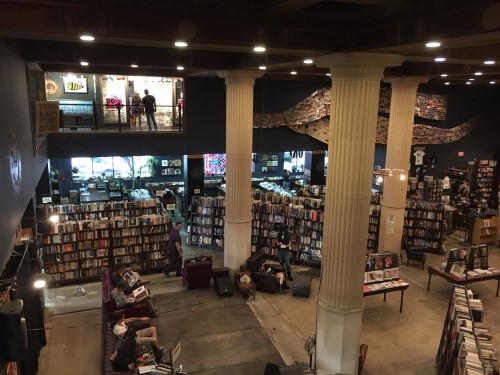 First off, it’s huge. The building used to be an old bank, so they have a couple of vaults and lots of smaller rooms in addition to this cavernous affair. The stage is perfect for readings and panels, and there are a few chairs around — though, to be fair, they don’t like folks loitering all day. They’re right in downtown L.A., so I get that. 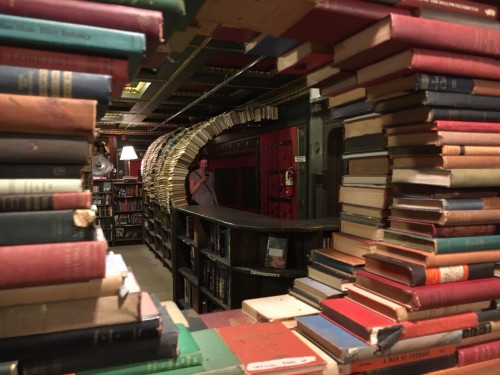 Book sculptures! Paper art! The second floor in particular is a warren of very cool little nooks and crannies and oddities like the ones above.

And this bad boy towers above all of it. Someone put a lot of love into this store. There’s a massive collection of vintage, used and new books across every genre imaginable. You want self-help? YA? Biography? Classics? SF/F? Lit fic? It’s all there. Well, mostly all there. I suppose I could get nitpicky about authors of more recent vintage — they have the big names in most categories, but less so midlisters. But their used book selection more than makes up for it. I saw dozens of novels I read when I was a kid. It was a total memory lane thing.

So. The Last Bookstore is in downtown Los Angeles on 5th and Spring. It’s worth braving the city’s notorious traffic to spend an hour in book-lover bliss. I’m glad I went, and you should go too.

In other news, I’m happy to report that, as per usual, I crunched on a whole heap of words on my flight over here, and that the second MAJESTIC-12 book is coming along swimmingly. There was one particular historical event that really spurred the entire concept behind the book, and today was the day where I got to write my version of it. It’s one of those “you can’t make this stuff up” events, and I hope I did it justice.

All right. I’m off to find a good taco and a beer. Viva Los Angeles.

3 responses to “Pilgrimage: The Last Bookstore in Los Angeles”