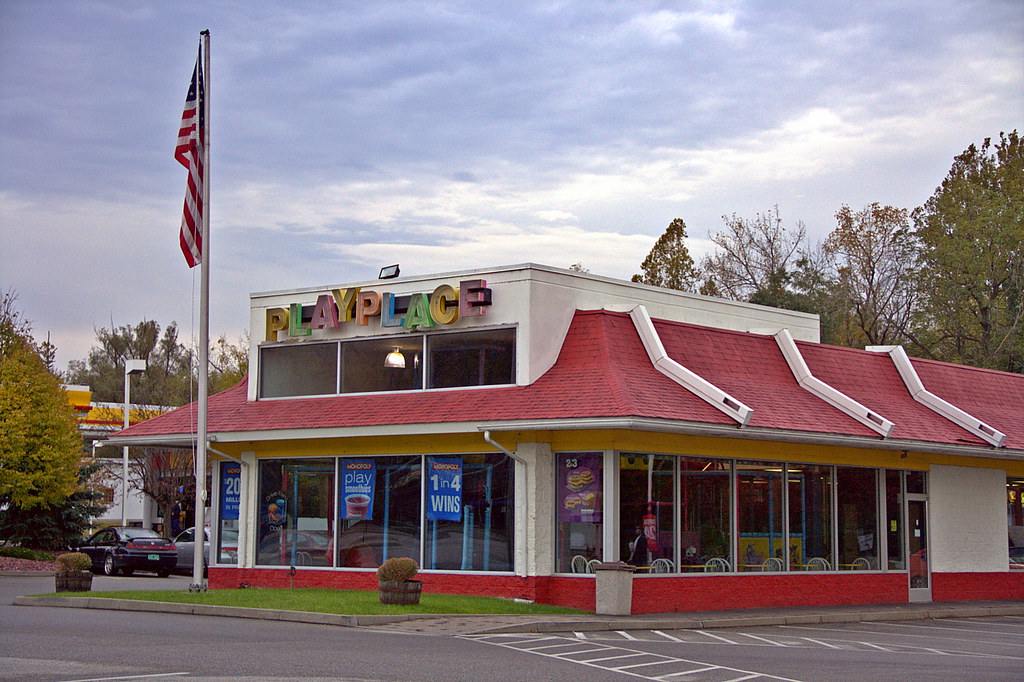 This isn’t my McDonald’s, because they tore down the one I worked at and put this one up next door.

I am not, actually, a big fan of McDonald’s. I can’t really remember the last time I ate there — chances are, it was during a road trip somewhere and the Golden Arches was the only option for the next sixty miles, or something like that. Mickey D’s hasn’t been a dining destination for me in at least two decades, easily.

The food is, of course, a nutritionist’s nightmare. Yes, there are healthy options on the menu, but nobody really goes in for those. You want a salad, you have options for salad beyond McDonald’s, is what I’m saying. Breakfast, if I’m being honest, is actually about as healthy as your typical big breakfast — i.e., greasy and laden with carbs and cholesterol, but actually less so than your typical platter at a Jersey diner.

The parent corporation isn’t great, either. I remember when McDonald’s put out a money management guide that included a line for a second job — a not-so-subtle admission that a normal human can’t get by on a fast-food wage. The federal minimum wage is $7.25 an hour, which blows up to an annual salary of $15,080. By way of comparison, the federal poverty line for a family of four is $24,339.

And the work itself? Working the grill is hot, sweaty, greasy and during rush hours, a non-stop parade of rapid, repetitive, assembly-line work. Working the counter is likewise rapid and repetitive, and while there’s less heat and grease, the procession of people at your register invariably includes people with hygiene issues, angry people, rude people, horrible people in general. Not all, of course — but enough that if you get out of a shift without an unpleasant experience with humanity, it’s a pretty excellent day.

I know all this because from 1987 to early 1993, on and off, I donned the taupe uniform — and later, the managerial clip-on tie — of a McDonald’s employee, back when the minimum wage was $3.35, the McDLT was a thing, and salads were new and strange. I lived in a small town at the time, and Mickey D’s was the only joint that would hire on 16-year-olds without much fuss. By the time I went to college, they lured me back every summer and winter break by making me “breakfast coordinator” — the 5 a.m. to 1 p.m. managerial shift — and later assistant manager for the times I was in town.

Nothing is insurmountable. When it’s 10 p.m. on a Tuesday night, it’s you and two teenagers holding down the joint, and then two buses full of Vermont National Guardsmen pull in to your parking lot, it’s mighty tempting to just shut down the lights and lock the doors. Mighty tempting. But you don’t. You deal with the crush in the lobby, then yell out for the C.O. — because two months ago, you interviewed the commanding major general of the Army ROTC for a story while interning at a news service in Washington and “C.O.” seems like what you should ask for.

You get a captain who agrees to not only consolidate everyone’s orders and get them seated to wait patiently, but even gets four men to stay on the buses with the M-16s because your sixteen-year-old grill crew member literally started crying at seeing so much weaponry in her workplace. And then you churn out more Macs, fish, fries and nuggets as you’ve ever seen in one place, including massive amounts of comped food for the guys on the buses because you feel bad. And you still close on time at 11 p.m.

Seriously, you wanna learn how to work fast? Efficiently? You want to handle crises and roll with it and work the problem and all that crap? Go work at McDonald’s. I see a direct through-line in my career from handling a massive lunch rush to writing the AP NewsAlert that Bill Gates stepped down as CEO of Microsoft. You wanna up and quit as the only CEO Microsoft has ever known, Bill? Please, son. I once cooked 360 cheeseburgers in an hour. I got this. Book deadlines? Bad reviews? Whatever.

People aren’t all good or all bad. They’re just people. Look, I’ve seen things. I’ve seen a disgruntled customer throw his food directly in the face of a fellow manager, who proceeded to stand there and take it until the customer stalked off. (He then punched clear through the glass door of the salad cabinet once the customer was gone, but damn, that’s still some admirable restraint.) I have seen people try to cheat me out of 30 cents by claiming a large fry instead of a medium after the fact. And I let ’em  because, hell, if you feel the need to do that, my fry count pales in comparison to whatever issues you got going on.

But I’ve seen awesome people, too. I’ve seen customers by lunch for someone else just because they looked like they were in a rough spot, or they were short. I’ve had people try to tip. I’ve seen smiles and patience in the middle of a horrible rush in which the kid running the fry station was asleep at the wheel and literally the McDonald’s has no goddamn fries. I’ve seen the best and worst of people, and sometimes from the very same people.

And I learned to lead, too. I never got a formal manager training session or anything. Nobody ever taught me how to manage people, just inventory and production and cash register counts. I got keys to the building and the combo to the safe, but never once got a briefing on what to do when the grill person gets freaked out by the sight of thirty-plus military assault weapons. So you make do and you learn on the go. When your grill crew gets into a tartar-vs.-secret-sauce dispenser battle, you can choose to write ’em all up…or you can grab a tartar gun, catch the instigator right in the face, and tell them they have five minutes to clean up or else they get written up. And every now and then, you lead a sing-along of Bohemian Rhapsody in the middle of dinner rush. (I got written up for that myself, actually, but you know what? That crew would fall on their spatulas for me.)

It is really hard out there for a lot of good people. As a teenager, working at McDonald’s was kind of optional. Yes, I helped pay for my own college, but there’s a huge difference between working to pay for college and working to put food on the table. There were so many good people I worked with who almost invariably had been dealt bad hands. We’re talking factory closures, failed farms, layoffs, recovering addicts, dicey pasts, spousal abuse and abandonment, you name it.

Nobody working at McDonald’s wants to be working at McDonald‘s. Remember that the next time you go there, or to any fast-food or even casual-dining spot. It really is hard work and low pay. You actually don’t get to complain about hard work and low pay unless you’ve worked at Mickey D’s, because you have no basis for comparison. And yet people do it, they put in forty hours, grab overtime whenever humanly possible and usually work another job somewhere else at least part time. I worked with a woman whose car was repossessed during her shift. The shift leader offered to let her go and deal with it, but the poor woman decided to stay because she didn’t want to lose hours. Only when the shift leader told her she could officially forget to clock out did she go running after the repo man.

We also did a brisk business with regulars, too, who scraped up enough money for our food because it was cheap and hot. The guy who lived in his van and did odd jobs around town always ordered a Big Mac when he was flush, an 89-cent cheeseburger otherwise. There was the  little old lady anywhere between 90 and 300 years old who ordered a single biscuit with butter and jam each morning, and always asked for the “senior” coffee because the coffee was free to senior citizens, and would usually have the 92-cent tab in exact change. Actually, we’d get worried when she’d skip a day because…well, she was old. And she was so sweet, too. Even asked about college after she overheard me talking with a coworker about it. I know it’s impossible, but I hope she’s still there every morning, 25 years later.

To sum up: I can do anything and deal with anyone, basically, because I worked at McDonald’s. Honestly, I’m lucky to have moved on and will be luckier if I never have to go back. And yes, I wrote this for my newly-minted teenage daughter, because I feel like she should know.