The best beer in the world 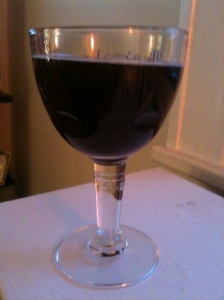 Tough claim, isn’t it? Everybody has a favorite, and the arguments can be passionate. But I’m not talking about Bud vs. Coors here. I’m not even talking about Sam Adams vs. Brooklyn.

It’s called Westvleteren 12, and it’s a Belgian-style tripel (or Belgian strong dark ale, depending on how you split your categorical hairs) made by Trappist monks in the Flemish countryside of Belgium. The monks of the Saint Sixtus abbey started brewing beer in 1838, and still do it to this day. No, it’s not like other Trappist brews, where the monks subcontract to commercial brewers, then sit back and count the revenues. (Chimay springs immediately to mind, though to be fair…Chimay is GOOD.)

No, I’m talking about monks who are still brewing inside the abbey, and who then go and sell the stuff out the back door, by the case, on a first-come, first-serve basis. They make only enough to pay the bills, apparently, though given that they’re probably smart guys, I have no doubt they recognize that the resulting rarity only enhances their beers’ reputation.

If you look at RateBeer’s 2010 list or BeerAdvocate’s top beers on planet Earth, you’ll see that Westy 12, as it’s called, does indeed rank as the best beer in the world. But is that taste? Or is it the relative rarity, and the resulting beer snobbery that can result when someone obtains a Westy 12 and lords it over the peasants who have not?

Well, two years ago, the family and I spent Christmas in Bruges. For an avowed beer fan, it was pretty close to Nirvana. I had even planned to rent a car, drive to the monastery about an hour away, buy a case of Westy 12 from the monks, and figure out a way to ship it back to Jersey. But when you add up the cost in both time and Euros, that plan seemed rather over the top. Especially when the beer store right off the Grote Markt had a few bottles squirreled away under the counter. So I picked up eight of ’em for about 8 Euros a pop. Drank two there. Brought the rest ome and consumed them with friends and family over the course of 2009.

And I kept one…until yesterday, when I celebrated the New Year with my final Westy 12, aged for more than two years in the bottle. (With a 10.2% alcohol-by-volume, it ages very well.)

Let me tell you, it’s not hype. Westy 12’s a sweet beer, full of mild spice notes, a touch of vanilla, and a wine-like alcohol finish. It tastes like Winter to me. Festive. And when you drink one, don’t make plans for after. The alcohol is subtle going down, but kicks you when you’re done!

Alas, now I’m all out of Westy 12. Thankfully, there’s hundreds of very, very good beers which are far more accessible right here in New Jersey. And I’m sure I’ll geek out on a few of them in this blog.

But for now, a moment of silence for the last of the Westvleteren. At least until I get back to Belgium!

One response to “The best beer in the world”