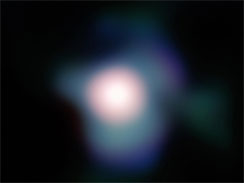 Is the star Betelgeuse about to go supernova? Will Earth get a “second sun” for a few weeks? Will night turn into day? And did the Mayans (or Incans, Nostradamus, Egyptians, crystal-clutching New Agers) predict it all, just in time for the 2012 faux-pocalypse?

As a former journalist, I have a facination with news stories gone bad, and this is one of them. The whole thing started this past week, when News.com.au ran a piece on Betelgeuse’s impending supernova. Yes, it’s going to blow. And it’s going to happen soon. However, “soon” in astronomical terms is measured in thousands of years, not in terms of day planners. So Betelgeuse could blow tomorrow. It could blow in a million years. It could’ve already blown up, and we’re just waiting for the light to reach us from 600 light-years away.

Next thing you know, it got picked up everywhere, most notably by The Huffington Post, which ran its piece with all the subtlety of a runaway freight train. New sun by 2012! Just like Star Wars! Earth pummeled with streams of neutrinos!

The light from Betelgeuse’s supernova could indeed reach us next year, or in our lifetimes. It could show up in a million years, when humanity has either evolved in unrecognizeable ways or managed to whack itself out of existence. When it does indeed go supernova, Betelgeuse’s light will be about as bright as cresent moon for a few weeks. During the day, it’d be like a star visible in daytime. At night, it’d cast its own shadow. There would be a neutrino shower…but those particles will pass harmlessly through the Earth, and us.

In other words, don’t get your panties in a bunch. Odds are, we’ll never see it blow. And if we do, well, it’ll be a cool show, but that’s about it. And it doesn’t mean that the aliens are coming to get us, or that all life on Earth will curl up and die.

Some journalistic clarity would’ve been super here. But I suppose the allure of 2012 headlines were too great for some editors to ignore.