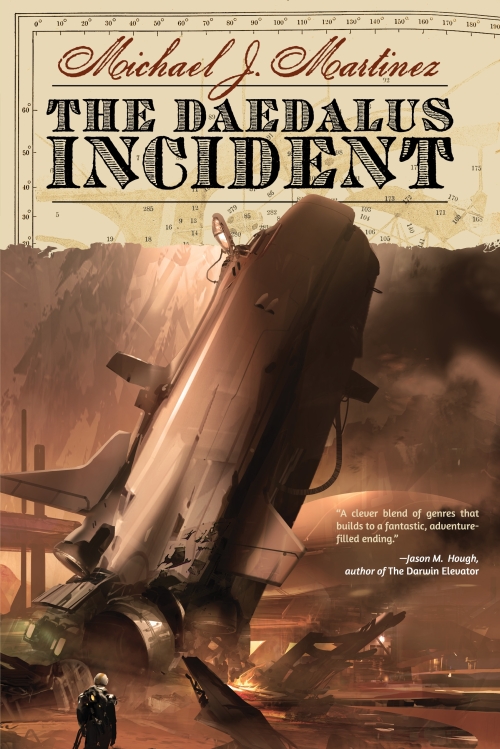 After a very long, long wait, The Daedalus Incident is finally available in stores and across formats. It’s been such a long wait, in fact, that I signed a deal to write two sequels while I was waiting…and the acknowledgements for Daedalus I wrote nearly six months ago should probably be updated. I didn’t get a chance to do that before the book went to press — we really wanted to meet our deadlines — but hey, that’s why the Internet is awesome. That, and cat pictures.

Below is the acknowledgements that appear in the back of the book. After that, you’ll see an addendum for all the folks who helped bring this book out during some very interesting times….!

It would be impossible to list everyone who had a hand in the genesis of this novel, but I’ll do my best with the space I have. If you’re not listed here, I assure you the omission isn’t intentional!

My mother always encouraged a love of books and writing, and bought me my first copy of the Advanced Dungeons & Dragons books before I even turned 10. And my late grandfather always told me that hard work and determination would pay off. Thank you, Mom and Pop.

More than 20 years in journalism and communications has left me with a ton of people to thank for making me the writer I am today. If you ever edited anything I wrote, know that I was listening – even when it seemed I wasn’t – and that you helped me get to the point where I could write this book.

My fantastic agent, Sara Megibow, believed in this book before it was even any good, and taught me so much about the art and business of writing. She is an outstanding agent and a better human being. Never has there been a more determined advocate, and I firmly believe you would not be reading this without her efforts.

I must also thank my old friend Andrew Montgomery, a fantastic writer in his own right, for his ideas and critiques of this book over the past decade. Likewise, Jason M. Hough has been very generous with his time and thoughts on this project, even while working on his own novels. And John LeMaire not only lent his name to a pirate, but used his art to plant amazing visuals in my head so many years ago.

Jeremy Lassen of Night Shade Books continues to take chances on debut writers, and for that I am most grateful. I learned so much from my editor, Ross E. Lockhart, about what works and doesn’t work in fiction writing, and his patience and encouragement were amazing. Thank you to both of you, and to everyone at NSB.

Then there are the two people who make everything in my life worthwhile. My amazing daughter Anna is the soul of kindness, encouragement and love. I hope this book shows her the power of following your dreams and working hard, just like my grandfather’s example showed me. You can do it, kid, whatever “it” is.

My wife, Kate, has truly helped make me the person I am to today. Without her patience, support, faith and love, I wouldn’t be anywhere near the man I want to be, and this book just wouldn’t be here. I love you, Kate.

Finally, to whomever is reading this book, thanks for giving it a shot. I hope you like it!

The above was written before Night Shade Books had it’s various troubles and prior to the sale of its assets to Skyhorse Publishing and Start Media. The book was originally due out May 7, and well…that didn’t happen. The fact that the book is out this week is a testament to a lot of hard work on the part of a lot of talented, dedicated people.

A lot has been written about how Night Shade was run, but the fact of the matter is Jeremy Lassen and Jason Williams managed to find a buyer for their company’s assets — which means Daedalus is hitting shelves this week. A lot of ink’s been spilled about how the deal went down; for my part, I’m simply grateful to them for making it happen, because the book wouldn’t be there otherwise.

Tony Lyons at Skyhorse and Jarred Weisfeld at Start took a chance on Night Shade, and I’m glad they did. Their enthusiasm for Daedalus and their professionalism is greatly appreciated. I also want to thank Jason Katzman, Cory Allyn and Ardi Alspach for working incredibly hard post-acquisition to get the new Night Shade off the ground. They’re great fans of the genre and talented professionals besides. I’m looking forward to working with them on The Enceladus Crisis and its follow-up book.

There’s also been a lot of ink spilled about the Science Fiction and Fantasy Writers of America lately, not all of it great. But in the case of the Skyhorse deal, SFWA was fantastic. The organization was a tireless advocate for authors’ rights during the acquisition process. Mary Robinette Kowal spearheaded SFWA’s involvement in the deal, and I cannot thank her enough for all her efforts. I continue to be a proud member of SFWA, and I encourage other authors to join. Yes, there have been stumbles, but smart people are working on making it a better organization for everyone.

While Daedalus‘ release date kept getting pushed back, the community of SF/F authors, reviewers and fans were absolutely fantastic. Their support and enthusiasm for my book really kept me going during some very trying times. Michael R. Underwood, author of Geekomancy and Celebromancy, was kind enough to say very nice things about Daedalus, as was Jason M. Hough, author of The Darwin Elevator and the Dire Earth cycle. Thank you both!

The following authors hosted me on their blogs over the past several weeks (or will be hosting me in the near future): Mary Robinette Kowal (again!), Anne Lyle, Heather McCorkle, J.M. McDermott, John Scalzi, Bryan Thomas Schmidt and Chuck Wendig. I can’t thank them enough for paying it forward by helping out new authors.

The Hugo Award-winning fan site SFSignal has been a fantastic advocate for genre fiction, and everyone involved in the site was very welcoming to this newbie. In particular, many thanks to John DeNardo, Paul “Prince Jvstin” Weimer and Patrick Hester for giving me some prime digital real estate to get the word out about Daedalus.

I also want to thank the following reviewers and fan writers for allowing me onto their pages: Dan Hanks of Fantasy Faction, Abhinav “Shadowhawk” Jain of The Founding Fields and Shadowhawk’s Shade, Kristin Centorcelli of My Bookish Ways, Stefan Raets of Far Beyond Reality and Tor.com, Michael Below of Edi’s Book Lighthouse, Sally Janin of the Qwillery, Matt Mitrovich at Alternate History Weekly Update, Shaun Duke and Paul Weimer (again!) of the Skiffy and Fanty Show, Jay at SupaFi64, and Feliza Casano of the Rathalla Review and Girls in Capes. Also, thank you to Tor.com and io9.com for being gracious enough to bring parts of Daedalus to their readers.

Justin Landon of Staffer’s Book Review gets a double shout-out, because not only did he give the book a great “not-review” and hosted me for a guest post, but also helped the original Night Shade team in their decision to acquire Daedalus in the first place. Also, many thanks to Vanessa O’Loughlin at the Irish writing site writing.ie for hosting some of my work about writing, and to New York Times-bestselling author Peter V. Brett for subjecting himself to an interview.

Finally, I’m giving Sara Megibow another thank-you, because she basically negotiated two contracts for the very same book because of the acquisition, and she did so with humor and grace. Best. Agent. Ever.

One response to “Daedalus acknowledgements”