Inspired by the Winchester Mystery House

Imagine you lost your child, your spouse and your parents in the span of a few short years. You also inherited a massive fortune as a result. What would you do? How would you avoid sinking into a spiral of depression?

On top of all that, what if you thought you were cursed, haunted by all the people who died in the course of creating that family wealth?

Sarah Winchester was the heiress to the Winchester firearms fortune, and faced exactly that. Her response was…unique, shall we say.

The Winchester Mystery House in San Jose, Calif., started out as a simple1860s farmhouse, purchased by Sarah in 1884. She began renovating – and renovating some more. When she died in 1922 and construction finally ceased, there were 160 rooms, including 40 bedrooms, two ballrooms, 47 fireplaces, 17 chimneys, two basements and three elevators.

Plus, the architecture is haphazard at best. There are skylights in floors, staircases that go nowhere, cabinet doors that open onto bare walls, windows that were built over so they don’t allow in any light or air…it’s a crazy quilt of crazy.

Since I’m in Silicon Valley for work, and at liberty until Sunday when I fly to L.A., I figured I’d check the place out. Word is that it’s haunted, though I didn’t see any ghosts or have anything unexplained go down. It’s worth the trip, especially if you love a great story. 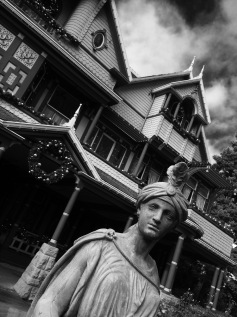 Our tour guide, a fine gentleman by the name of Alan, said Sarah herself served as the chief architect of the place. She of course had no training; at night, she would allegedly enter her séance room (yes, she had one) and sketch out what the spirits wanted her to do to the house. She’d hand off her plans to her full-time, on-site builders the next morning, and off they went. If the new plans contradicted the old floor plans, well – either rip it down or build around.

This went on for 38 years. And some say it was done in order to appease – or thwart – all the people who died after being shot with a Winchester gun. The maze of rooms, the dead-ends and stairs to nowhere were allegedly designed to confuse or bind the spirits of the dead. Or so they say. And the kicker is that she could never stop building lest…well, lest something bad happen to her.

There’s certainly no doubt that Sarah Winchester was a superstitious sort. I mean…séance room, for starters. Also, all but one of the columns in the house were installed upside-down, apparently a symbol of good luck. The number 13 is everywhere – in  the number of windows or wood panels in a room, in the lights installed on a chandelier, even in the number of holes in the sink drains.

As a speculative fiction author, my head was swimming. I immediately thought of ley lines and feng shui and how energy can be captured, tied up and focused. Lovecraft came to mind as well, especially his bit about “lines and curves that could be made to point out directions leading through the walls of space to other spaces beyond” from his story “Dream in the Witch House.”

Personally, my writer-mind is fascinated by the drive to build…and build…and build. Of course, the stories surrounding the ghosts are, I’m sure, embellished by the for-profit enterprise that turned the house into an attraction (though the house remains well worth it). But can you imagine? Sink your fortune into building a house that’ll hopefully keep your ghosts and demons away for another night. Appease the spirits of those who died while your family profited. Use strange geometry and construction to harness occult energies for…some strange purpose.

How can you not come up with ideas after seeing and hearing all that?

In reality, of course, it’s obvious that Mrs. Winchester’s later years were sad ones, given her losses. She was said to be very charitable in her community and generous with her servants and workers (with the occasional bit of testing and spying notwithstanding). She was a recluse and probably had more than a little bit of mental illness to contend with. I don’t mean any disrespect to her or her descendants.

But man…the story possibilities here are endless. Kind of like the rooms in her house.