Win an advance copy of The Venusian Gambit! Here’s how! 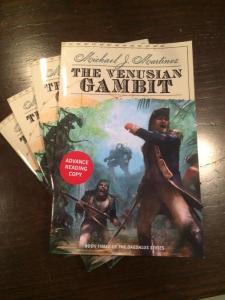 Want one? Enter to win!

I have two extra advance-reader-copies (ARCs) of The Venusian Gambit and, frankly, I want to give them to people. So let’s do the very first Gambit giveaway right here!

You have two ways to win:

You have until Monday, March 23 at 11:59 p.m. EDT to do either of these things. Or both. Yes, if you follow and hashtag on Twitter and subscribe to the blog — which, admittedly, is a whole lot of me in your online life — you’re entered twice, and you’ve doubled your chances of getting a free book.

Now, to be clear, the ARCs haven’t benefited from the loving ministrations of a copyeditor, which means there’s misspellings and a few grammatical snafus, plus my French leaves much to be desired. (Yes, the final version has been thoroughly scrubbed.) That said, Gambit doesn’t hit shelves until May 5, so you’ll be getting a first look early on. And you know what? If you win, I’ll sign and personalize it for you. Or someone else, if you’re so inclined. Even your cat.

On Tuesday, I’ll choose the two winners using a random number generator for each giveaway and reach out to the winners via Twitter, e-mail or WordPress.

There you have it. You have until Monday night. Get Tweeting and/or subscribing!

8 responses to “Win an advance copy of The Venusian Gambit! Here’s how!”