The Venusian Gambit gets a starred review from Publishers Weekly 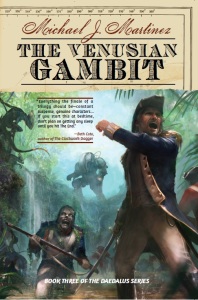 I’ve known about this one for a little over a week now, but it’s still just absolutely amazing and leaves me dazed every time I read it. Publishers Weekly saw fit to give The Venusian Gambit a starred review! And they said such incredibly nice things, such as:

Overflowing with complexity and eloquence, the conclusion to Martinez’s Daedalus Trilogy (following The Enceladus Crisis) seamlessly blends popular elements from science fiction and fantasy, producing a work that raises the bar for both.

It then goes on to give a summary of Gambit, which proves to me that, yes, they are indeed talking about my book. I mean, it’s always good to check, right? And they sum it up by saying:

[Martinez] skillfully handles the intricacies of characterization and the many moving parts, building to the trilogy’s utterly satisfying and quite epic finale.

There’s more at the link, of course, including that very shiny star next to the title. I know we’re supposed to act like we’ve been there, done that — and indeed, The Daedalus Incident received a starred review and year-end honors from Library Journal when it came out, which was amazing — but this was exceedingly special and I am mighty grateful for it.

My thanks to the folks at Publishers Weekly for giving The Venusian Gambit a shot — they get a LOT of books to review and can’t always get to all of them. And FYI, I’ll be returning to the PW Radio podcast in May to talk about the Daedalus trilogy and whatever else I got going on, so stay tuned for that.

The Venusian Gambit comes out May 5. Click here for pre-order info and more. Can’t wait to see this one out there!