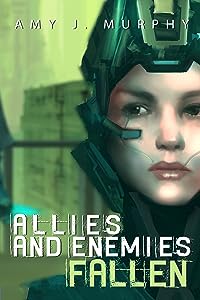 I had the pleasure of meeting Amy J. Murphy last weekend at the Vermont SF Writer’s Series reading, and I very much enjoyed what she read from her latest book, Allies and Enemies — Fallen. Turns out it’s part of the Kindle Scout program, and she could use some backing to get this thing going. So here’s Amy with a guest post about her work and how you — yes, you — can help her out with just a couple mouse clicks.

What makes my book, Allies and Enemies-Fallen, so gosh darn special?

A long time ago in a galaxy called Louisiana, my brother and I would play “Star Wars” with the neighborhood kids. Generally, this involved our swimming pool and a re-imagining of the trash-compacter scene. My brother got to be Luke Skywalker; William, the uber-tall kid was always Chewbacca; and I had to be Princess Leia. Yawn.

Why did I have to be Princess Leia? Because you’re the girl, was the answer.

No offense to her Worship, but I wanted to be Han Solo. Everyone knows the best character is Han Solo. Duh. He has an awesome spaceship and gets all the nifty one-liners. And, let’s face it Princess Leia gets captured (twice in Return of the Jedi) in all three movies. Not the best in leadership for a rebellion, IMHO.

What does this have to do with your book series, Allies and Enemies?

Aside from establishing my own geeky origin story, those experiences probably played a big part in fueling my craving for space opera where the women get to be the action heroes, not the prisoner. But much of science fiction comes up short in satisfy that craving. It’s all mostly dudes calling the shots. So, I looked to Ellen Ripley, Aeryn Sun and Zoe Washburn for my inspiration in developing, Commander Sela Tyron, a main protagonist in Allies and Enemies-Fallen.

It made sense to first develop a world that would make Sela possible. Allies and Enemies happens in a corner of the galaxy dominated by the Eugenes– a xenophobic, ethnocentric space-faring society loosely based off ancient Sparta. They have a strict class structure: leaders (Kindred), warriors (Volunteers) and commoners (Citizens). Think of it as the societal embodiment of “lead, follow or get out of the way”. Non-Eugenes are considered “non-regs” and in need of domination. These not-so-cuddly militarized folks have encountered only one race, the Sceeloid, that offer anything in the way of a challenge. (Also, Eugenes have discovered and are not very keen on Humans—a theme that grows in importance as things progress.)

This is the world of Sela Tyron. She’s a battle-tested Volunteer, purpose-bred to dish out ass-kickin’s. Even if she can be impulsive and hot-headed, she’s resourceful and smarter than the average grunt. Tyron’s had the party-line drilled into her since birth, but she’s intelligent enough to realize deep down that it’s not the only truth that exists. When she allows herself to be influenced by a rather free-thinking officer from the Kindred class, it sets into motion a chain of events that she’s brave enough to face head on even though each challenge threatens her toughened exterior.

So, what actually happens in Allies and Enemies?

In short, everything. The first book in the series, Fallen, opens in the middle of the action– a bad situation growing worse by the minute. Commander Tyron and her team, originally sent to quell an insurrection on a Eugenes-held world, realize they’ve been abandoned by the top brass. In order to get an extraction, her captain, Jon Veradin, jeopardizes his career. And, in turn, Sela sacrifices the only life she has ever known to save him from a traitor’s death. Without giving too much away, their new careers as fugitives are complicated further when Veradin’s sister, Erelah, shows up in pretty rough shape.

This isn’t a traditionally published book. How’d that come about?

Allies and Enemies has been kicking around in my brain for a while. However, I find the whole process of seeking traditional publication rather intimidating. As another author friend of mine pointed out, the whole find-a-literary-agent system seems to be intentionally set up to discourage. There are virtually tons of sites and advice columns out there about landing a literary agent. The message seems to be, you won’t get published without one of those. I flirted with the idea and realized it wasn’t for me. Why make yourself miserable on purpose? With the accessibility of ebook publishing, I chose that path.

However, there was a problem: I had an unwieldy manuscript that was easily three volumes, written in fits and starts. It was evident I needed a professional editor to help me get this story into shape. Those cost money. To get this covered, I launched a Kickstarter campaign. The response was both inspiring and humbling. Friends, family and absolute strangers helped me actually exceed the amount I needed to raise. My friend, Alex Winkler, a video game concept artist, created beautiful cover art. I found an editor, Pat Dobie, whose style was a great fit for me. A few agonizing months later, I had a finished manuscript.

I had researched the business of self-publishing an ebook, learned way too much about ISBNs, and encountered ebook formatting tools (horrifyingly called “meat grinders”). I was ready to pull the trigger on the self-published ebook experience.

Then I got an email from Amazon about the Kindle Scout program. Almost immediately, I was pretty much sold on the idea. Which is what brings us to the now: the clock ticking down on the Kindle Scout campaign for Allies and Enemies.

How does Kindle Scout work?

It’s a platform sponsored by Kindle Press in which you, the reader, can nominate books for publication during a campaign period of 30 days based off a blurb, cover art and an excerpt. If you like what you see, you hit the “nominate” button. Although you’ll be asked to log onto your Amazon account, it’s no cost to participate, and you can nominate up to three books. Keep in mind the 1st one you nominate will “fall off” your list if you go nuts and select more than three. (So don’t do that. Unless that’s what you meant to do, of course.)

If a book you have nominated ends up selected for publication, you get a free copy of the ebook. A pretty sweet deal!

The campaign for Allies and Enemies-Fallen ends on July 16th. The direct link to the campaign page is here: https://kindlescout.amazon.com/p/1F4R79WXQUFQ8

So there you go. Some fun facts about why you should check out Allies and Enemies-Fallen: cool female protagonists, an action-packed space opera story, and the chance to be part of “reader-powered” publishing.

Visit amyjmurphy.com for updates on the Kindle Scout campaign for Allies and Enemies. Or follow on Twitter @selatyron.

One response to “Guest post: Amy J. Murphy on Allies and Enemies-Fallen”