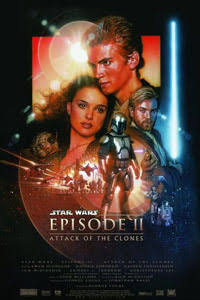 Back once again with the Star Wars rewatch in preparation for Episode VII: The Force Awakens. We already tackled The Phantom Menace, so now it’s time for Episode II: Attack of the Clones.

My ding against Phantom Menace was that it was largely superfluous; you could’ve handled Anakin’s introductions to Obi-Wan and Padme in about 15 minutes and built a better movie around that. My problem with Attack of the Clones isn’t that it’s meaningless — it advances both the A-plot (Anakin’s fall to the Dark Side) and B-plot (the rise of the Empire).

My problem is that it has plot holes large enough to drive a Star Destroyer through. Seriously, some of this stuff makes zero sense.

Let’s start with the much-maligned love story between Anakin and Padme. Now, I don’t blame either actor here for what we saw, because Lucas loves his stilted exposition and lengthy declarations of emotion. And having been a lovestruck late-teens, early 20-something, I can actually relate to Anakin’s headspace here, to my great surprise. No, my issue is Padme, as in…what the hell are you thinking?

Anakin is utterly unstable. It’s apparently widely known that Jedi aren’t supposed to get romantic or emotional. So there’s your first tip-off. The stalkerish leering and horrid attempts at flirtation aren’t helping, either. But then, right in front of Padme, he confesses to slaughtering an entire tribe of sentient beings — women and children, too! Sure, the Sand People killed Anakin’s mom, but do you really just sit there and say, “Hey, Anakin, you’re human. We make mistakes. It’s OK. Hugs?”

Hell, no, Padme. You call the Jedi Council on Coruscant and let them know they got themselves a massive problem. Can love actually overcome a confession of mass murder? Padme’s a senator! She helps make the law! And fine, even if she really is falling for this incredibly awkward and frighteningly powerful teenager, the logical thing would still be to turn him in and hope the Jedi could straighten him out.

So yeah, Padme, I’m not buying it. You still have a lot of agency in this film, which is great,  but this whole love-is-blind thing really undoes a lot of that.

And then there’s the Jedi Council, equally blind to Anakin’s breathtakingly numerous issues. I suppose we could write that off as the shadow of the Dark Side looming over them, or their diminished ability to use the Force, but I suspect it’s just plain stupidity. We have Yoda experiencing Anakin’s “pain” while he’s busy committing mass murder, first off. Yoda knows he’s supposed to be guarding Padme, a critically important politician, on Naboo. Do you not maybe send a comm and see where he is, how it’s going with the whole guard duty? Is Padme OK? Nope. You make weepy-eyes at Samuel L. Jackson.

Next, Obi-Wan confronts Anakin about his feelings numerous times during the finale. It’s quite obvious, even without the Force, that Anakin digs this woman big-time. He’s willing to abandon his mission to save her, even abandon the Jedi. Obi-Wan is Anakin’s master, and somehow doesn’t send Anakin to remedial Jedi training? For an order that’s supposed to avoid attachment, Anakin’s attachment to Padme is both obvious and far too intense. So what do they do once the battle is over? They pair Anakin back with Padme again and send them off to Naboo, knowing full well that his feelings for her threaten his future and, potentially, could lead him to the Dark Side. Or, at least, they should’ve known.

I mean, Yoda himself even saw Padme rush in and hug the one-armed Anakin after Count Dooku escaped. Y’all Jedi are supposed to read minds and emotions? It’s all right there, man. Crushingly obvious. Maybe they spent too much time detaching and can’t recognize attachment now. I dunno. But Anakin is the Chosen One! Shouldn’t they be keeping a better eye on him? The guy who’s supposed to bring balance to the Force is acting and feeling incredibly unbalanced.

So those are the A-plot issues: Neither Padme nor the Jedi Council recognize how badly Anakin is slipping from the path of goodness, even though he’s not hiding it at all. Hey, I killed a bunch of people because I got mad! Hey, I’m willing to ditch the Jedi for love, right in the middle of a massive battle!

The biggest B-plot issue is the whole presence of the clone army on Kamino. Apparently, Master Sifo-Dyas ordered a clone army to be created about 10 years prior to Attack of the Clones, probably right after Phantom Menace. It was an army for the Republic, which hadn’t approved this at all — in fact, both the Senate and Jedi Council were completely unaware of this rather large (several hundred thousand troops) army being grown. Then Sifo-Dyas was conveniently killed after placing his order.

So where did Sifo-Dyas get the money for this army? Armies are expensive! Who did the Kaminoans check-in with during the whole decade-long process? I mean, I’m sure there had to be regular payments, updates, delivery schedules,PowerPoint presentations, etc. They don’t just take on a massive project and then sit there for ten years waiting for a call. Was Sifo-Dyas working for Palpatine? Did he foresee the rise of the Separatists? Why didn’t he tell anyone?

There’s actually a very good explanation for all this that happened in the Star Wars novels; you can get a download on it here, but the fact that the movie leaves it muddled isn’t good. Basically, this was all Palpatine, playing both sides of the Republic/Separatist conflict to gain power for himself and ultimately take over the galaxy. You gotta love ambition.

But here’s the thing: Nobody really questions the sudden arrival of this huge army. Apparently, the Republic doesn’t have a standing army. And then, boom — Palpatine gets his emergency power (from Jar-Jar! Nice touch), announces the creation of the Grand Army of the Republic, and then, gee golly, here’s an army of several hundred thousand soldiers ready to go. And with proto-Star Destroyers and gunships and tanks and weapons and everything.

You think the Jedi would pause to think about that. You think the Senators against the creation of the army, such as Padme or Bail Organa, might just hold a hearing or something. Nobody even bothered to trace the billions of credits necessary to pull this off.

Star Wars is at its best when the story is straightforward. We have a war to fight, a resistance to mount, a planet to save. Politics is anything but simple. If you’re gonna do a story about political machinations, you have to get the politics right. Here, the politics make no sense, and the complexity just inverts upon itself, leaving a tangled mess.

Now, with all that said, I liked this movie better than Phantom Menace. I thought there was a good dynamic between Obi-Wan and Anakin (horrible dialogue aside), I liked Palpatine’s “mentorship” of Anakin, and I think the notion of him caring about his mom and pushing him to the Dark Side is pretty spot-on. The bones of the story are there, and there are some excellent action set-pieces that are very Star Wars  — the ship combat in Geonosis’ rings, the critters in the arena, the battle between droids and Jedi.

Yes, the middle dragged quite a bit — there was almost zero action or peril from the time Obi-Wan and Anakin found Padme’s would-be assassin to when Obi-Wan took on Jango Fett in the rain. I didn’t time it — could’ve been maybe 20 minutes, felt like an hour. At least it picked up briskly after that.

Attack of the Clones is clumsy. There are plot and character holes galore. The improvements upon the first one, though, are certainly noticeable. There’s action that actually serves the A- and B-plots. There’s far less Jar-Jar. There’s a bit of intrigue and some great moments that feel very much like Star Wars. If you don’t think about it too much, it’s a perfectly fine way to blow a few hours.

Next up: Episode III: Revenge of the Sith!

One response to “Star Wars wayback machine: Attack of the Clones”