Look what showed up in the mail

I arrived back from Los Angeles late Friday night and the book gods decided to welcome me home with a care package Saturday. To wit: 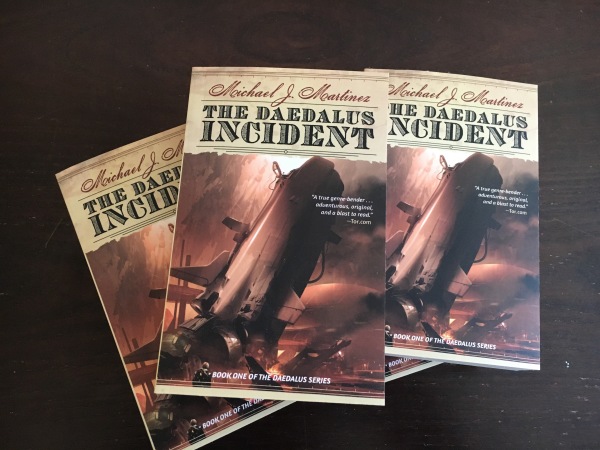 The Daedalus Incident in mass-market paperback!

The cover quote is from the Tor.com review way back when, and they put the Library Journal snippet on the back. It’s the same cover art — courtesy of Sparth — with a similar but pared back design. There’s also a nice callout to MAJESTIC-12 on the back cover, because, spoiler alert… 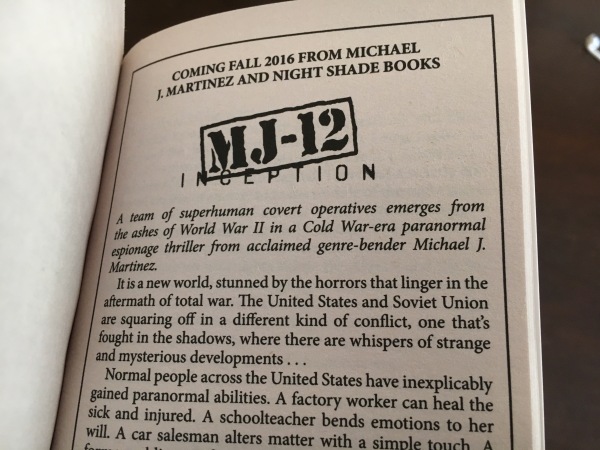 Look at that pretty logo. Go head…soak it in. This is the very first time any part of MAJESTIC-12 has arrived in print. Daedalus has the entirety of Chapter 1 of MJ-12: Inception inside after this little advertising bit. And there’s some nice little teasers in this image, particularly about a few individuals who have been endowed with strange powers: healing, emotional manipulation, matter alteration.

And here’s an excerpt from the excerpt: 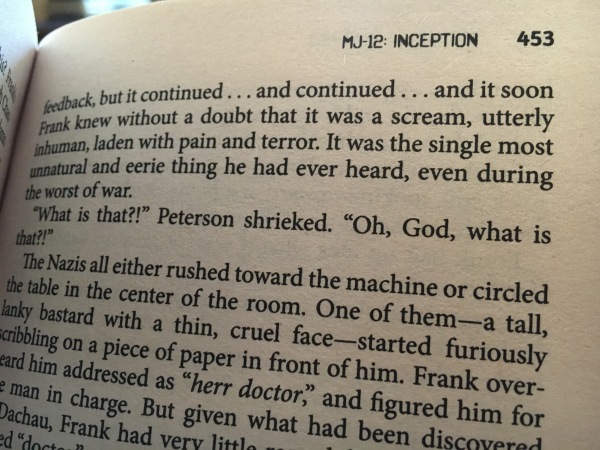 Yes, there are Nazis. At least for a little while. Then there are worse things, because this is just Chapter 1, people.

As you might imagine, I’m pleased as can be about all this. If you’ll recall, The Daedalus Incident didn’t get a very cohesive, well-planned rollout back in 2013, what with Night Shade Books nearly going under before being bought by Skyhorse Publishing. Things have gotten markedly better, and it’s been great to see the new NSB really trying to lay a foundation for the MAJESTIC-12 series. (If you want to read more, head on over to MJ-12.net and check out some other hints and teasers.)

And of course, I’m excited to welcome a new audience to the Daedalus trilogy as well. The Daedalus Incident is slated to be in bookstores on March 15, and is already on sale at Amazon if you want to get it a bit early. It’s more affordable and now fits in your hip pocket, too. We’re all about convenience.

Finally, you still have a week to Facebook/Tweet/blog/Pin the forthcoming release of the mass-market paperback and, in doing so, enter to win a free signed copy of the book and an advance reader copy of MJ-12: Inception when it becomes available. You can also leave reviews of the book on Amazon, Goodreads or other venues as well, and that counts as more entries. The Operation: DAEDALUS promotional details are here. I’m sewing it up on the 15th, and will have a winner a few days after that. So get on it and win!

One response to “Look what showed up in the mail”