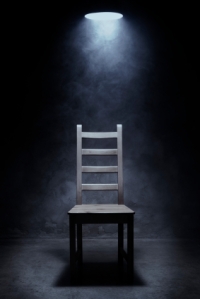 SCENE: The precinct downtown. A gray room with bare walls, a metal table, two uncomfortable chairs, a single bulb dangling from the ceiling. A detective paces the room in a suit stained with coffee and despair. He suddenly wheels on your worldbuilding and slams his hands on the table. “TALK! Or it’s the chair for you!”

Actually, I’d read the heck out of that. *makes note to self*

Sadly, this isn’t what I mean by “interrogate your worldbuilding.” I was on a couple of worldbuilding panels last weekend at Phoenix Comicon, and I briefly touched on this concept. So I want to sit down and work through it a bit better.

No interrogation room, though. Go sit on the couch and grab some tea or wine or something. This should be mostly painless. Ready? Let’s go. (Warning: There are mild spoilers ahead for MJ-12: Inception.)

Worldbuilding in fantasy and science fiction starts with a mere kernel of an idea, an unpopped piece of popcorn in your brain, just waiting to be nurtured into buttery goodness. For some, that kernel is a character. For others, it’s setting. To wit:

The Daedalus Incident‘s kernel: I want sailing ships in space. Like, Master and Commander on Mars!

MJ-12: Inception‘s kernel: What if there was a spy who could read minds — but only as the person he was trying to read was dying in that moment?

So that’s your core concept, the diving board into the worldbuilding pool. It’s the leaping-off point for the entire universe that you, the writer-god, will create through nothing but your own sheer will and a laptop computer. (Or a notepad, if you’re super old-school.)

I’m a former journalist, and I flatter myself to think that I’m good at asking questions. And so I ask questions of this kernel to try to develop things further. It’s like the logical side of my brain having a conversation with the creative side of my brain — which isn’t weird AT ALL, I promise. 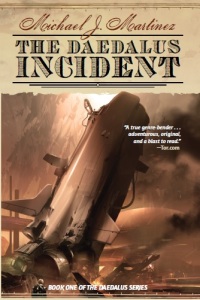 So let’s break down some of the first questions I asked myself about The Daedalus Incident.

That was the first tough one, and led to a few cycles around my brain and a bit of research. I dismissed “magic” out of hand, because again, Spelljammer kind of did that. I thought about something like steampunk or clockworks, but steam engines were still a bit more in the future than what I wanted, and clockworks left me cold. So I looked at the various beliefs and mysticisms of the time and, lo, I stumbled on the Great Work — alchemy.

Alchemy was in its twilight in the 1700s, already largely replaced by real scientific inquiry, but there were still some puffers around peddling their ideas and wares. In fact, two of the more all-time famous alchemists  were active in the mid-to-late 18th century — the Count St. Germain and Cagliostro. For those who have read the Daedalus trilogy, these names will be rather familiar! If not, suffice it to say that my worldbuilding exercise not only led to a key solution to the sailing ships question, but also a couple characters and the beginnings of an actual plot.

From there, the questions splintered off into any number of directions: How does alchemy work, then? Where do these ships go when they leave Earth? What might they encounter? What does the political situation look like? Economics? Culture? Historical fantasy is fun because it gives you a starting point for those questions, but I also think it’s more rigorous because your answers tend to have to be pretty logical and sound. 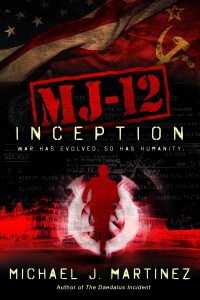 So what about MJ-12: Inception? We have a spy character who can read minds, but only from those actually in the process of dying — at the moment of death, in fact. What’s next?

And that’s when I went off to start some Wikipedia surfing and Googling, and that quickly led me to the tinfoil-hat sections of the Internet. Soon, I was neck deep in Roswell and Area 51 and…the MAJESTIC-12 conspiracy. MAJESTIC-12 also led me to a possible source for these abilities, but I didn’t actually want to write an alien invasion story, either. But reading up on it introduced me to a lot of historical personalities and the outlines of a story framework. So I kept the conspiracy and the players, but changed the reasons for why there’s a conspiracy in the first place.

And as for that reason, well…MJ-12: Inception is out Sept. 6 in hardcover, so you’ll have to find out then. (You can even pre-order via Barnes & Noble, Amazon, Books-A-Million, Mysterious Galaxy, Book Depository and your local bookseller via IndieBound. And if you’re in the San Francisco area, go to Borderlands Books and support that store!)

Anyway, just like with Daedalus, that worldbuilding interrogation splintered into a million different directions. I had to figure out which pieces of MAJESTIC-12 to keep and which to toss. I had to determine a source of the spies’ abilities and what that source meant to the world — where it came from, why it was there etc. And as with the other series, the answers not only built a world, but also informed the plot as well — a plot that will stretch over as many books as they’ll let me write, while still letting me do a self-contained, kick-ass spy story in each book.

I don’t actually have a specific list of questions for worldbuilders — maybe that’s another post? — but I think the basics I was taught in journalism could apply. We’re always taught the who what where why how of things, and that’s a great place to start. Especially how and why.

Now, go forth and build worlds!

One response to “Interrogate your worldbuilding”