The Venusian Gambit coming in paperback next month; The Gravity of the Affair still free to download! 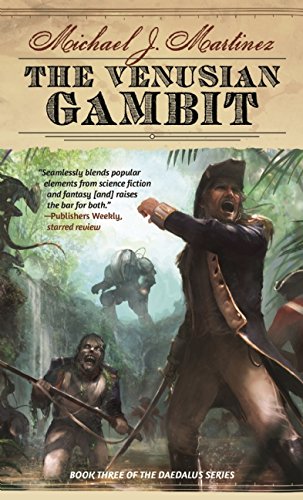 It’s past time to bug you good people about the upcoming mass-market paperback release of The Venusian Gambit, which is due to hit stores July 11. (I thought it was July 5, but Amazon says otherwise. So.)

I admit, Gambit was my favorite of the three Daedalus books to write. By the time I started in on Gambit in 2014, I knew the characters and the worlds very well, and I very much enjoyed seeing this saga come to a rousing conclusion. I got to end this story exactly how I wanted to, with lots of great pulpy goodness and interdimensional hijinks.

And to my great delight, Publishers Weekly felt the same way, giving the book a starred review. I’m still kind of stunned by that. It’s pretty nifty for a book that has mech-suited astronauts fighting side by side with Venusian aliens and 19th century Englishmen against French zombies created with alchemy.

If that last sentence didn’t convince you to pick it up next month, I should also point out that the new paperback edition has an all-new, exclusive excerpt of MJ-12: Inception tucked in the back. This bit introduces you to Maggie, a troubled young woman who’s manifested a very powerful ability — one that bring people to their knees with a thought.

July 11, you guys. The mass-market paperback is already up for pre-order at Amazon, and I’ll be mentioning other sites as they become available. And yes, I expect Amazon will reduce the Kindle price as well once the paperback is released.

I also want to point out that my e-novella, The Gravity of the Affair, remains free to download at Amazon, Kobo, iTunes, Google Play and elsewhere. (Barnes & Noble has it at 99 cents, for obscure and strange business reasons; don’t blame me.) I wrote it back in 2013 as a kind of introduction to the world of the Daedalus trilogy, but it remains a complete, stand-alone story. So if you’re curious about this whole sailing-ships-in-space thing, or just haven’t read it yet, it doesn’t get much better than free!

Tagged as Gravity of the Affair, MJ-12: Inception, Venusian Gambit