The Gravity of the Affair free for a limited time 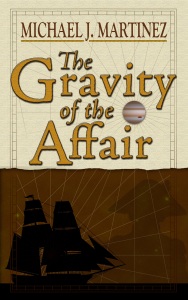 Here’s a little incentive for folks to dive in to the Known Worlds of the Daedalus series: The tie-in novella The Gravity of the Affair is now free on Kobo Books, iTunes and Google Play until the end of the month.

This stand-alone story features British naval hero Horatio Nelson’s very first command as an inexperienced lieutenant — on the seas of Ganymede. It loosely ties into some of the events in the first novel, The Daedalus Incident, but is a complete stand-alone tale of adventure at sea and in the Void ’round Jupiter.

Why just Kobo, iTunes and Google Play? Mostly due to pricing policies at the various ebook vendors. If you’re a B&N Nook reader, we managed to get the price down to 99 cents — cheaper than your morning coffee! And for Amazon fans, the price remains at $2.99…for now. (We expect that to drop once Amazon’s hamster-powered algorithms notice the price change on other sites.)

Furthermore, if you want the Audible version, you can get it for just $1.99 — still cheaper than your morning coffee! — and have Bernard Sotero Clark read it to you. (He’s also one of the two narrators for the entire Daedalus series, and both he and Kristin Kalbli really knocked it out of the park.)

So maybe you’ve heard that The Venusian Gambit was pretty good, but you’re still weighing whether this whole sailing-ships-in-space thing is your brand of vodka. Here’s your zero-risk chance to find out. Enjoy!

Tagged as Daedalus Incident, Gravity of the Affair, Venusian Gambit