2016 may not have been the best of years — thanks, Donald — but I’m pleased to say that I wrote some pretty good stuff this year, and I wanted to take a moment to talk about it, being in a somewhat reflective mood as the year spirals toward its fiery doom…er…wraps up and folks get blitzed on cheap champagne.

The biggie, obviously, was the hardcover release of my latest novel, MJ-12: Inception, first of the MAJESTIC-12 series of Cold War paranormal spy-fi thrillers. I was super-pleased with the reception, and chuffed to see folks embrace it. To all those readers out there, I thank you muchly for your enthusiasm and kind words.

Night Shade Books also released the Daedalus trilogy in mass-market paperback this year. It was fun to see those books get new life and new readers. 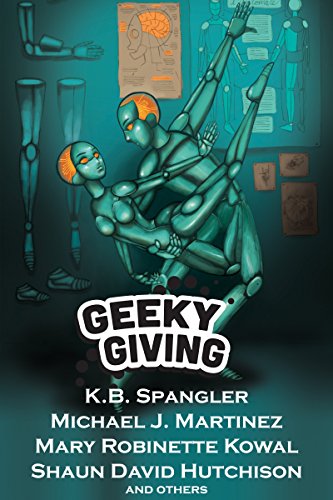 I also contributed a novelette, “Mind Flight,” to the Geeky Giving anthology effort, which benefits the Barrow Neurological Institute in Arizona. Barrow works to combat neurological disorders, and the theme of the anthology was to embrace that cutting-edge research. “Mind Flight” is the story of a pilot who links her brain to her fighter jet in order to help fend off an alien invasion — and what happens when the aliens figure out a terrible way to fight back. It’s my first hard SF work, and I’m proud to have it in there with so many other talented writers. All proceeds go to Barrow, so pick up a copy!

Finally, I got another chance to embrace my geeky, misspent youth by contributing a short story to the Endless Ages anthology, which featured stories set in the Vampire: The Masquerade game setting. “Tiger” is the story of a young vampire caught up in the power games of her elders, with near-disastrous results. It was a total blast to revisit the setting and embrace my Gothic Punk side.

I also had an article published in the October issue of Writer’s Digest, talking about how I use Excel to outline my novels, which was pretty cool. Sadly, you’d need to get the magazine to read the actual piece, but I can point you to the online exclusive bit, wherein you can download part of my outline and see how the alleged magic happens.

As for 2017? MJ-12: Shadows, the follow-up to Inception, should be coming out some time in the late summer/early fall, and I believe plans are in the works for a paperback release of MJ-12: Inception before that. I also have a bit of a passion project I’m working up on the side, and I’m hopeful it finds a home. I also have a short story or two I’m noodling on, but the plate gets full fast, so we’ll see how it goes.

As of right now, I’m not sure what my con schedule will look like for 2017 quite yet. I like Phoenix Comicon and DragonCon a lot, but I’m wondering if it’d be worthwhile to mix it up this year. I don’t think I have the capacity to add to my schedule — I have a full-time job on top of all this fictioning, after all — and I’d be torn about missing out on two fantastic cons. But there are others that seem interesting, and have the benefit of not falling on two super-popular holiday weekends, so we’ll see.

Again, much thanks and gratitude to all the readers who picked up my work this year. You give me the fuel to keep at it, and I deeply appreciate it.

May you all enjoy a peaceful holiday season, and may we all have a better year ahead.