They will try to silence our voices. They won’t. 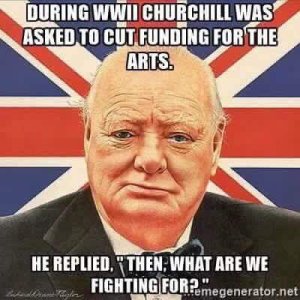 The new regime in scared.

Reports coming in from Washington say the new administration and the Republican-controlled Congress are planning to shutter the National Endowment for the Arts and the National Endowment for the Humanities. The NEA and NEH each had a budget of $146 million in 2015. That $292 million is less than the cost of three F-35 Lightning II fighter aircraft, if you want to count beans about it. It’s a few hundredths of a percent of the total federal budget.

Oh, and they want to privatize the Corporation for Public Broadcasting, which offers great shows on current events, science, culture and history. And let’s throw in all of the disparaging crap the nominee for Education Secretary has said about public education.

There are plenty of government-funded programs that are spiraling out of control in terms of costs, plenty of fat to trim. But they’re going for arts, the humanities, education, information. And already the U.S. lags well behind Canada and the U.K. in funding for arts and culture.

They’re doing it because they’re scared. They think they can silence artists and scholars, keep Americans dumb and complacent, lest they lose their funding, their perks, their comfy offices.

In five states, Republicans are working to pass bills that would utterly criminalize protest and civil disobedience. Jaywalk on your way to lunch? $50 fine. Join a protest that closes a street or highway? A year in jail and thousands of dollars in fines.

They’re scared. They don’t want to see thousands of people protesting as they strip away healthcare, de-fund commuity outreach programs, shut down initiatives against domestic violence. They want to silence us.

The new president was elected on a platform of “they,” rather than “us.” “They” are coming over the border to take our jobs. “They” are sucking up good citizens’ tax dollars with entitlement programs. “They” are artists who should only entertain, rather than use their voices for anything other than pretty pictures and mindless comedies.

And these cuts are designed to turn “they” against “us.” Because this regime is scared. Cowardly. These nouveau autocrats will not support a culture of critical thinking, artistic expression and freedom of speech, because deep down, they know that culture — that very American culture — will be fundamentally opposed to them.

Our heritage is rebellion. Our nation was born of rebellion, spurred by a government in which the colonies were not represented. But our heritage is also cooperation — E Pluribus Unum. Out of many, one. We are all Americans, no matter who we voted for. But they would silence those who disagree. They would divide the one America into many, turning brother against brother to make it easier to maintain their power and comfort, to divert money into tax savings for the wealthy.

They’ve been successful so far. But they’ll push their luck. They’ll go too far. And when they do, we will be ready for them.

Today we must raise our voices, and there are many more days to come. Today, it is incumbent upon all of us to become the artists, the scholars, the scientists and the protesters. This government will not protect our voices and preserve our culture of cooperation and rebellion against injustice. Because it scares them.

So it’s on us. It’s on use to create, to study and learn and become informed. And most importantly, it’s on us to use our voices to speak out against injustice, to speak for the Americans who will lose their health insurance, either through repeal of the ACA or through the rising premiums to come or through pre-existing conditions no longer protected. We have to speak out against violence against women, against people of color, against LBGTQ+ communities. Speak out against their efforts to divide “us” into “they.”

We are the artists and the scholars, the workers and the students, the people of the United States of America. We are many, and we are one. And no matter how scared they get, no matter what that fear of reproach or rejection drives them to do, they will not silence us.

Instead, we will show them the door.

Let’s get to work.